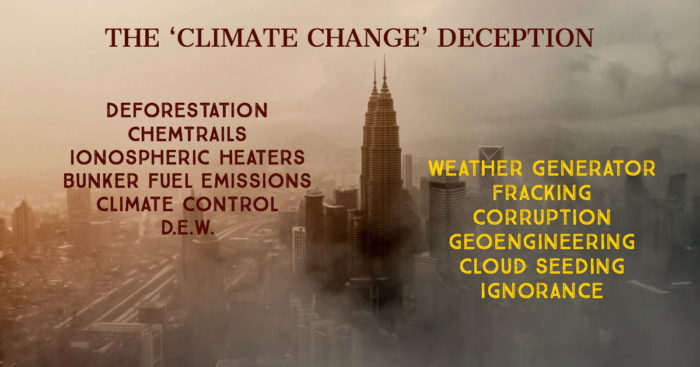 What if you could decode the narrative presented in the mainstream to show that seasonal weather changes are intentional? What if you could prove that weather systems are created by aerosols and ionospheric heaters to steer the rivers of the sky? What if the ships in the oceans, like planes in the atmosphere, seed the clouds by ejecting toxic bunker fuels that create storms? What if the 5G network is the final element of the climate control puzzle?

Even if you could prove these things, what if they are part of an illusion, a construct? A deception? What if it is all a distraction from discovering something greater, on a higher level?

Cloud seeding and weather modification are nothing new. Operation Popeye was a highly classified chemical weather modification program deployed in Southeast Asia used as a tactical weapon. Conducted over Thailand, Laos, Cambodia and Vietnam during the Vietnam War, from March 1967 to July 1972, the operation was able to extend the monsoon season to support U.S. government efforts.

To create acceptance of weather changes among the masses, the term “Global Warming” was penned and blamed on people’s behaviors, led by politician Al Gore.  However, with evidence of a Grand Solar Minimum, where the sun’s activity significantly falls, even NASA says a Grand Solar Minimum is here. This means that for the next 11-year cycle Earth is entering a cooling phase, heading toward a mini ice age. This might explain why the term “Global Warming” was changed to “Climate Change.”

Enter a new and younger UN spokesperson, whose parents hail from the entertainment industry, to convince you that you are the cause of “Climate Change.”

Weather control operations did not end in Vietnam. Weather technology is being deployed by the government around the world today. And the consequences of toxic fallout are harming the Earth and all life with high levels of metals, including barium, aluminum, strontium, and frequencies.

According to a December 2019 article in the journal Advancing Earth and Space Science, stratospheric sulfate aerosol geoengineering could alter the high latitude season cycle.

In plain terms? When power companies openly admit they can modify the weather by using injections of silver iodide from ground-based towers and flares on modified aircraft to coax winter storm to produce more snow, there is little left to conceal, and little need to debate the climate control denialists who choose not to see the evidence. When companies like California’s PG&E are a part of the SmartMeter network, then you understand the level of infrastructure and monitoring involved in energy management. When you see a $9 billion investment in the rural deployment of 5G, it means that every cubic inch of Earth will be managed by a few companies.

It means that human behavior is only a drop in the Climate Change bucket.

Between climate crusaders, Jim Lee and Mike Morales, you can turn off your TV and turn to real weather reporting. Jim Lee’s website, climateviewer.com has volumes of articles from years of data collection that show weather control technologies have been used since the 1800s. Mike Morales provides nightly news on YouTube using state-of-the-art weather satellite imagery, with real-time commentary. From algae blooms in the oceans, to bunker fuel operations off the coasts, to the deployment of accelerants that start fires, to the creation of storms, Morales’ reporting offers the mainstream, scripted reporters a run for their money.

The players behind the weather technology grid act like demi-gods. Case in point: Weathergenerator.net, a United Arab Emirates company, boasts, “We don’t create clouds, we enhance them.” The goal of the project is to turn the desert green. See Project Green Desert in the Middle East:

Once again we have shown the effectiveness of the Weather Modification Technology, the Weather Generator located in Dubai. Today @21:00 PM 3 November 2019 we have Switched OFF the WG to prepare the ground work for Rain Enhancement Mode to increase precipitation throughout Northern Africa and Middle East. We would like to warn our viewers In advance, that we are going to switch the mode of the Weather Generator to “Rain Enhancement”, as it was promised.

Climate Control Trading LLC out of Dubai brags about creating and steering hurricanes and ending dust storms, to modify regional and global weather using ionospheric modification and cloud ionization. And they charge by the barrel.

David Miles’ company, Miles Research, boasts about putting out the fires in Australia. While Miles is willing to speak about his work in an interview with Jim Lee, past negative publicity of his company Acquiess suggests that he conned farmers by promising rain without explaining how he does it.

If you control the weather, the water, and, ultimately, the financial markets of the world, then Climate Changes become Money Changers.

Climate Dollars and the Water Market

From the rivers of the earth to the rivers of the sky, “water rights” will be sold by governments and companies on the global water market. BITonFly is the first company created for the monetization of global market water services. Jim Lee further breaks down the monetization of water resources by sharing websites such as Global Climate Hub And Center of Trading of Climate Services. Controlling water on a worldwide basis is the foundation of Technocracy and part of The Transhumanist Agenda.

Trading water globally will soon be accomplished using Climate CRON, an international cryptocurrency created on blockchain technology. Note, 1 CLIMATE CRON is equal to the cost of 1 barrel of freshwater. They will issue 100 billion coins.

Wherever technology controls the weather, Technocrats control the global water cycle. We are entering a world where a few global companies will charge you to make it rain, using ionospheric technology to make it happen.

How do Technocrats connect populations scattered over the world, outside of cities? They burn rural habitats and herd people to concentrated ‘Stack-n-Pack’ city centers where they can be more easily controlled. High-speed rail systems are being built on every continent; Africa, Japan, India, China, South America, Europe, in Spain, Germany, and the list goes on. The grid of fires on the California and Australia coasts appear to be mirror images of each other, making way for the planned construction of high-speed rail systems for both areas.

If Technocrats control the weather, the markets, and transportation, what do they not control? How do governments streamline approval to roll out 5G technologies without going through the normal public review/approval process? Do such overt displays of power show that there is nothing left to hide about the structure of control? Do such actions portend an Artificial Intelligence (A.I) system of control where humanity takes a back seat? Read about how Operation Regionalization (my term) is underway on a global scale.

In order to function within a controlled system, we must first understand the deception, which has been fed to us from the beginning, from politicians and entertainers. The people at the top of the power structure do not have empathy. They do not have a conscience. Perhaps they are not real people at all. Despite everything on the surface working against humanity’s evolution, Earth is also the soul’s playing field, and as such, there are always opportunities. If you look beyond the distractions and deception, you might find them.

What if everything observable on the outside represents what is happening within our bodies? A parasitic government that feeds off the people shows that humanity, itself, has allowed an invasion by artificial technologies. Fear is at the core of the bio-invasion. Fear controls people by stopping them from thinking and acting for themselves. They are more easily subdued and coerced to do things against their own self-interest. If the key to control is through fear, then the key out of this cycle is to let go of fear and work from truth from the inside out. Think of Earth’s Matrix construct as a tool in the soul’s journey, in a spiritual war.

2 – Work In All Your Layers

Human beings are more than the physical body. In order to shed the artificial invaders, you must work through your extra senses. You must access the energetic part of you, by aligning body, mind, soul, spirit. Go to your soul (your gut) for your answers instead of from external sources, since the challenges faced on Earth go beyond your physical senses alone.

As a metaphysical being, if you are able to access frequencies beyond the fear frequency, you are able to flip the MATRIX construct, which is grounded in fear. Grounding yourself in prayer (asking for something) or meditation (listening for the answer), you can transcend the visual construct using love, the highest frequency, to move to the next level, the level of freedom and truth. These aspects, truth, freedom, love, fear are embodied. Embody those aspects you wish to see on the outside.

As a physical being, you can protect your body from harmful frequencies using the tools of Nature. Survival in a world of dark frequencies will be found in those who can prevent both physical and emotional breaches, and maintain integrity over their physical and auric boundaries.

Tools to transform dark frequencies on a physical level include carbon-based tools including shungite minerals, orgonite devices, Orumus powder in paints, for your dwelling, oremus liquid supplements, healing clays or carbon 360, herbal supplements and teas, plants and trees indoors. As the body is carbon-based, therein lies the tools to self-preservation. Use herb-infused vinegar against aerosolized chemicals around your home and body.

The vinegar of the Four Thieves can be made using a simple recipe that protected people during the Bubonic plague when unknown exposures killed untold numbers of people:

In a large glass jar, combine all the dried herbs and garlic, if using.

5. Opt-Out of the Conventional Food System

Opt into natural healing modalities using Nature’s tools to heal and reverse dis-ease. Choose foods in their original packages, from the earth, organic and unadulterated. Find local farmers to support. Grow your community by organizing a community garden where you come together for individual and community health. The food closest to your home is the best food for you on all levels, from local raw milk and meats to local honey. As the body is cleansed, so is the mind.

By knowing who you are, from the inside out, there really is no need to prove anything, since everything in the MATRIX is a construct for individual soul growth. Everything outside yourself is a mirror to show you a direction to choose. Do you accept an implanted chip to connect to the global network, and divest your soul? Or do you say NO, and accept the consequences of your choice, and strengthen your soul? Let your immune system be your guide on the physical level. Know simply what you tolerate and what you do not, and you will know your answer.

Deconstruct the construct by knowing who you are on all levels of your being, and work from your center. There is a spiritual war going on. You only need to know which frequency you want to work with.

Rosanne Lindsay is a writer, blogger, and Naturopathic healer. She is the author of two books, The Nature of Healing: Heal the Body, Heal the Planet, and her story of thyroid disease reversal: Free Your Voice, Heal Your Thyroid, Reverse Thyroid Disease Naturally. Find her at Nature of Healing on Facebook. Consult with Rosanne to create a custom healing plan via Skype or Zoom or phone. Contact her at natureofhealing.org. Subscribe to her blog for updates at https://www.natureofhealing.org/blog/ and visit her podcast o archives at Blogtalkradio, and on Thursdays at 5 pm CDT.