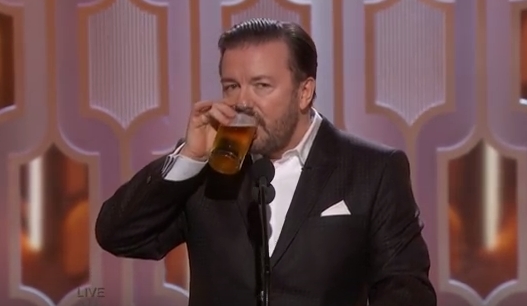 The 59-year-old comedian, who is known for his biting and irreverent humor, slammed what he says is the escalating use of the term “hate speech” to crush any dissenting view from the mainstream narratives, noting in an interview with talkRADIO host Kevin O’Sullivan that it has unleashed “a new weird sort of fascism” onto the world.

“There’s this new weird sort of fascism of people thinking they know what you can say and what you can’t say and it’s a really weird thing that there’s this new trendy myth that people who want free speech want it to say awful things all the time, which just isn’t true. It protects everyone,” Gervais said.

According to Gervais, there are two problems with the term “hate speech,” both of which he described in the interview as “catastrophic.”

“One, what constitutes hate speech? Everyone disagrees. There’s no consensus on what hate speech is. Two, who decides? And there’s the real rub because obviously the people who think they want to close down free speech because it’s bad are the fascists. It’s a really weird, mixed-up idea that these people hide behind a shield of goodness,” Gervais said. (Related: United Nations now targeting free speech on a global scale, under the banner of fighting “hate speech”.)

In addition, the outspoken actor, who is currently writing and directing the Netflix comedy series After Life, noted that “social media amplifies everything” – making it easier for online “outrage mobs” to zero in on personalities, whether or not they actually commit anything “problematic.”

“If you’re mildly left-wing on Twitter you’re suddenly Trotsky. If you’re mildly conservative you’re Hitler and if you’re centrist and you look at both arguments, you’re a coward and they both hate you,” Gervais said, referring to the online shaming started by social justice warriors that targeted 150 celebrated writers, academics and journalists who recently signed a letter criticizing “cancel culture.”

Among those targeted by the online mobs were authors Margaret Atwood, Salman Rushdie, Martin Amis and Noam Chomsky.

This is not the first time that Gervais criticized liberals, left-wing activists and SJWs and their propensity for online mobbing in the name of political correctness.

“I think offense is the collateral damage of free speech, and it’s no reason not to have free speech,” Gervais said earlier this year, prior to hosting the Golden Globe Awards.

According to Gervais, inadvertently offending someone by exercising one’s right to free speech is “the lesser of two evils,” noting that the total loss of free speech would be “horrendous.”

Gervais, in his interview, lamented that had his mockumentary The Office been made today, it would have been immediately ripped apart by online SJWs driven by their inclination to weaponize political correctness.

“This was a show about everything. It was about difference, it was about sex, race, all the things that people fear to even be discussed or talked about now, in case they say the wrong thing and they are canceled,” Gervais, said.

The Golden Globe and Peabody Award-winning BBC comedy, which aired from 2001 until 2003, featured a central character played by Gervais, who regularly made tone-deaf and offensive remarks to his colleagues.

“Now [the show] would suffer because people would take things literally,” Gervais said, again referring to the internet’s liberal “outrage mobs” who tend to take things out of context, “even though [the jokes] were clearly ironic.”

Other celebrities have taken up similar stances, such as Taylor Swift who described cancel culture as “a mass public shaming,” and former TV Superman Dean Cain, who recently described it as “a cancer.”

“This whole cancel culture thing is a cancer. It’s awful, terrible. I’m 100 percent behind what Ricky Gervais says. Free speech needs to be protected and the speech you don’t like needs to be protected. I am open to hear everyone’s point of view and I think everyone should be,” Cain said in an appearance at Tucker Carlson Tonight.