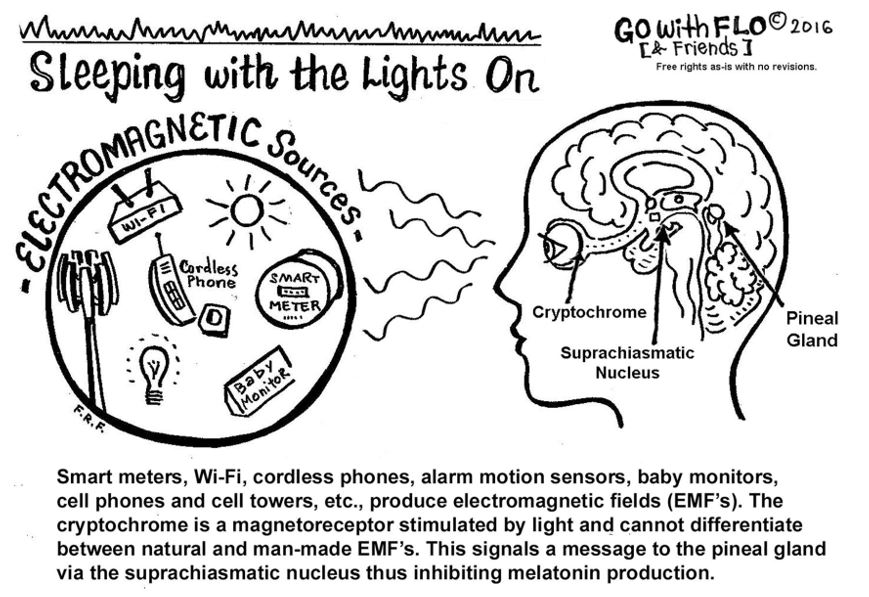 This is Paul’s Story.

When the Arizona utility company came to install a new digital, wireless electronic meter on Paul Harding’s home 10 years ago, he welcomed it, because he thought that it would enable him to save money. (For those who are not aware, smart utility meters enable time-of-use billing, with peak, off-peak, and other rate schemes, including pre-pay.)

When it happened again at the exact same time the next morning, not sleeping, with the smart meter mounted 3 feet from his head, Paul got up and took out his computer. He typed in a search for “smart meter sleep problems.”

His query took him to Joshua’s Hart’s “Stop Smart Meters” website in California, and from there to the site of Canadian researcher Magda Havas, and the archive of military research papers by Zory Glaser. Paul spent the whole night reading. From that night on, everything in his life changed.  At the time, he thought that it all started in February of 2011 with the meter. But he later learned that it started a decade earlier.

Paul began his campaign to get the meter removed from his home by calling the utility company, every day. And, his health was getting worse. He was experiencing numbness in his face and hands, digestive difficulties, tinnitus (which he later learned was microwave hearing), weight gain, and anxiety. He bought an EMF detection meter, and conducted his own research, on himself. “Whenever I felt badly, I was in a high EMF environment. “

The utility offered to come and check the smart meter for noise/sound violations, which Paul knew was of no benefit.  He wanted the meter off.

One day, in the Good Egg Restaurant in Phoenix, Arizona, the waitress complained to Paul that she was tired because she kept waking up at about 4 am. Paul explained that he knew exactly what she was talking about – that the utility companies were sending data transmissions at night, and people’s bodies were reacting. Other diners overheard the conversation, and one happened to be married to an executive at the power company. Within a week, the meter was off Paul’s house.

When the utility contacted him, they had a question for him. “You had a new meter back in 2001, when you were part of the pilot program. Why didn’t you contact us back then?”

And, it was true. In 2009, Smart Energy.com reported, “Salt River Project in Arizona is no stranger to smart meter technology, having been deploying smart metering for over a decade.”

Paul thought back to the wrecking ball that hit his home and his neighborhood years back – his soon-to-be ex wife’s bloody noses, their migraines, the kids always being sick, their irritability, and the impact on other homes in the area, with divorces, health issues including cancers, and early deaths. “No one was well in that neighborhood. They ruined our lives.”

Years later, Paul was visiting a family member who was working on the smart meter roll-out in Maine. His relative was complaining about “the crackpots that thought that they could ‘hear’ the meters.” Paul looked at him and said, “I can hear the meters.” By the end of the evening, the utility employee lamented, “I am working for the devil.”

Paul explains, “They send the data in short bursts at 4 am, and they are not ‘heating’ anyone, so it’s presumed to be safe. But it’s also like saying, ‘We’re saving the planet by getting rid of you.’”

As Paul was describing how healthy he is now, living off-grid in a home that does not assault his health, compared to his hellish years as an unwitting participant in the Salt River experiment, I was thinking about the research by Dr. Hugh Taylor. He is the Chair of the Department of Obstetrics at Yale University School of Medicine. As reported by the Environmental Health Trust,

“Dr. Taylor and colleagues found that when mice were exposed to cell phone signals while pregnant, their offspring showed increased hyperactivity and lower memory scores. In addition, his neurological tests revealed abnormal development of neurons in the part of the brain linked to ADHD. Several other experiential studies have found that in utero cell phone exposure leads to damaged brain development in mice and rats. Most recently, the National Toxicology Program found genotoxic effects in the frontal lobe of the brain in mice and rats exposed to daily low levels of radiofrequency radiation.”

What Should We Call Human Experimentation That Does Not Monitor Humans?

Real scientists, including those who signed the International EMF Scientist’s Appeal, do not just look at grid monitoring equipment in a distant energy lab, or utility investment projections, or work off of theoretical exposure models, which is how the smart grid investment wave has proceeded. Real scientists research the biological impact of the EMF/RF exposures.

As utilities installed first generation wireless meters across the country, without pre-market research, monitoring, or knowledge and consent, even physicians were in the dark about the contribution of artificial frequencies and poor power quality to symptom onset and illness. With the expansion of wireless applications, from WiFi in schools to macrotowers near residences, no epidemiology, no investigation, and no monitoring is the norm, even when harm in documented, as communities including Pittsfield, MA have painfully discovered.

In 2021, most doctors are still in the dark. This issue is only getting worse with the imposition of 5G infrastructure near homes. The grid is getting “dirtier” due to the adoption of more and more electronic devices that pollute power quality.

With all of the focus on addressing climate change for future generations, a polluting monstrosity is being created that is hastening, rather than addressing, health and environmental destruction And many Americans are unaware that the United States allows utilities to use the earth itself as part of the return circuit (unlike strict regulations in Europe), because the neutrals are overloaded.

The tech industry can create safer versions of their products, and infrastructure can be improved; but instead, legislation continues to protect industrial/military expansion, while actively denying that human physiology is signaling danger to neurology, immunity, and metabolism including blood sugar.

Magda Havas has conducted research regarding M.S. patients whose health improved dramatically when the polluted electromagnetic environment was addressed. On the other side of the equation, individuals with M.S. and other health vulnerable conditions were reporting that they were collapsing in their homes after smart meters were installed. No agency or environmental group promoting “green energy” or “clean energy” bothered to investigate or respond.

This clip from the James Russell documentary Resonance: Beings of Frequency explains the effect of EMF on poor sleep quality.

Coherence with Chronobiology is the Key to Health, RF/EMF is the Off Switch

Paul points to the Nobel Prize awarded in 2013 for discoveries in photobiology and the circadian clock. EMF receptors in the eyes send a signal to the pineal gland to produce melatonin at night. Melatonin is a powerful antioxidant that sends signals to repair cells. “The hypothesis that the brain does not distinguish between natural light and artificial EMF is certainly backed up by a wealth of research.”  – Professor Denis Henshaw, Bristol Univeristy,

Paul likened modern life to a race car with a pit crew that is under siege and can’t do its job. We are designed to go to sleep when the sun goes down. Technology is interfering with basic building blocks of life. Sometimes, naysayers will say, “But I’m healthy.” Paul’s next question is “What medications are you on?”

After buying his first EMF/RF meter, Paul now has many tools at his disposal, including a fluke scope meter that he learned to use by training with David Stetzer. David Stetzer and Martin Graham were involved in litigation with power companies over power quality issues, for dairy farmers who were experiencing loss of milk production in their herds. David and his colleague Martin Graham were pioneers in proving that ground current was creating biological harm. Epidemiologist Dr. Sam Milham is another expert in the field of power quality, electricity, and human health.

Initially as Paul was learning to investigate power quality and EMF/RF exposure, he visited homes of family and friends with health issues, informally. His method was simple – start turning things off, take measurements, and see how people feel. And measure. He had great success, for example, with his father who was struggling with unstable blood sugar. “When people do what they need to do in their homes, they feel better.”

Paul states, “The meter does not have an opinion. The data is conclusive.” Using an oscilloscope, he can show the waveforms of the kilohertz frequencies that travel internally to the body. Human beings are capacitors, and the kilohertz frequencies couple with the body, creating internal electric fields that disrupt the potassium ion channels. Internal fields create strokes, leg problems, and a myriad of other symptoms. Paul refers to expert military research documenting bioeffects of internal body voltage. No further research is needed.

Supposed clean energy and renewable installations could be designed to be non-EMF polluting, but are among the biggest offenders. Public health policy is not protective, not because the knowledge isn’t there, but because the economy continues to be based on active denial.  This has been the case since the U.S signed an international agreement in 1976.

In March 1976, the US Defense Intelligence Agency published an astounding report titled “Biological Effects of Electromagnetic Radiation (Radiowaves and Microwaves) – Eurasian Communist Countries.” The 34-page report analyzes numerous Soviet and Eastern bloc research studies that demonstrate a wide range of adverse biological effects caused by exposure to radio frequency radiation and microwaves. In its Summary on page vii, the report states: “If the more advanced nations of the West are strict in the enforcement of stringent exposure standards, there could be unfavorable effects on industrial output and military functions.”

“There are many simple practical things that people can do in their own homes to take the stress off of their own health, their children, their neighbors, and their communities. Your body uses electricity – so the wrong type can be harmful.  The cells in your body use electricity to function. These cells must generate the right kind of electricity to tell your heart to pump, your kidneys to clean your blood, your thyroid to produce hormones, your brain cells to comprehend this sentence – you get the point. Electricity inside your body is necessary and natural….But over-exposure to man-made radio frequency, electric and magnetic fields, and/or dirty electricity can have very bad health consequences. As your body’s cells are exposed to electricity at a greater intensity or for a longer term than your body is made to handle, they don’t function properly. This exposure is increasing in our modern society – with little to no regulation, despite science showing its harmful effects.”

“Now I am helping people. I am the last one that they see. They’ve spent thousands of dollars, eat organic etc. 98% of the time they have no idea that their immunological disorders, neurological diseases could be related to this issue of EMF/RF. When you disrupt the intercellular communication that’s what you get.”

During World War 1, President Theodore Roosevelt halted the transmission of telecommunications through the airwaves, recognizing the danger. Real men, like Paul, recognize the danger.

This is part of a Father’s Day 5G series which you can read in its entirety HERE.

Patricia Burke works with activists across the country and internationally calling for new biologically-based microwave radio frequency exposure limits.She is based in Massachusetts and can be reached at stopsmartmetersMASS@gmail.com.