NPR Embarrasses Itself With Misinformation and Blatant Lies 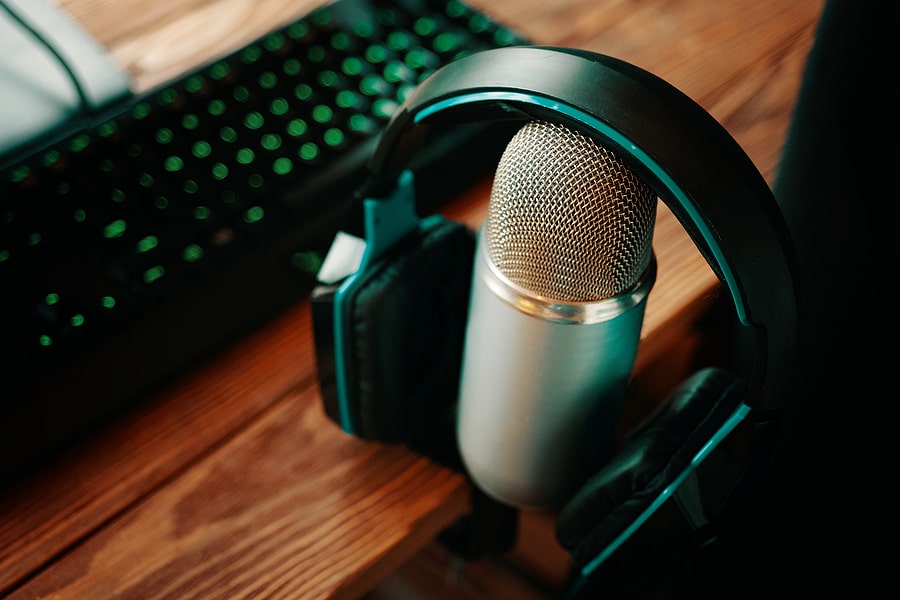 In a broadcast rife with misinformation, disinformation and outright lies, National Public Radio has embarrassed itself while maligning me. The September 21, 2021, broadcast opened with NPR host Robin Young calling me “the biggest disseminator of lies about COVID” — a false claim debunked and rejected by none other than Facebook itself, more than a month earlier.

In recent weeks, there has been a debate about whether the global problem of COVID-19 vaccine misinformation can be solved simply by removing 12 people from social media platforms. People who have advanced this narrative contend that these 12 people are responsible for 73% of online vaccine misinformation on Facebook. There isn’t any evidence to support this claim. ~ Monika Bickert, Facebook VP of Content Policy

Young then went on to claim that I started America’s Frontline Doctors, an independent organization that, in reality, I am not a member of and have no affiliation with whatsoever. I don’t even know anyone personally in the organization.

Young interviewed Dr. Humayun Chaudhry, president and CEO of the Federation of State Medical Boards (FSMB), about the FSMB’s recommendation to state medical boards to fine, suspend and revoke the licenses of doctors who don’t follow the mainstream COVID narrative.

Together, Young and Chaurdhry repeatedly demonstrated they’re either ignorant or deliberately spreading their own misinformation and disinformation when it comes to vaccine hesitancy, COVID treatments such as ivermectin (referring to it as an animal drug that has shown “absolutely no ability” to treat COVID) and medical professionals who are questioning the vaccines.

It seems rather obvious that Young is using a single — already discredited — source for her report, namely the Center for Countering Digital Hate (CCDH), which analyzed 483 pieces of social media content over six weeks1 to come up with what they called the “Disinformation Dozen.”2 I was at the top of that list.

The thing is, Young is actually spreading misinformation herself, because Facebook’s vice president of content policy, Monika Bickert, issued a statement3,4 August 18, 2021, saying there is no evidence to support the CCDH’s claims, and that the people named by the CCDH as being responsible for the vast majority of vaccine misinformation on social media were in fact only responsible for a tiny fraction — 0.05% — of all vaccine content on Facebook. Here’s an excerpt from Bickert’s statement:5

“In recent weeks, there has been a debate about whether the global problem of COVID-19 vaccine misinformation can be solved simply by removing 12 people from social media platforms. People who have advanced this narrative contend that these 12 people are responsible for 73% of online vaccine misinformation on Facebook. There isn’t any evidence to support this claim …

In fact, these 12 people are responsible for about just 0.05% of all views of vaccine-related content on Facebook. This includes all vaccine-related posts they’ve shared, whether true or false, as well as URLs associated with these people.

The report6 upon which the faulty narrative is based analyzed only a narrow set of 483 pieces of content over six weeks from only 30 groups, some of which are as small as 2,500 users. They are in no way representative of the hundreds of millions of posts that people have shared about COVID-19 vaccines in the past months on Facebook.

Further, there is no explanation for how the organization behind the report identified the content they describe as ‘anti-vax’ or how they chose the 30 groups they included in their analysis. There is no justification for their claim that their data constitute a ‘representative sample’ of the content shared across our apps.”

Young and Chaudhry conclude the show by calling on social media companies to strengthen censorship on their platforms and for state medical boards to take a more active role in investigating and revoking the licenses of doctors who don’t stick to the COVID propaganda narrative.

While NPR’s ethics handbook7 declares the purpose of NPR is to “pursue the truth” and to be “diligent” in their verification of facts, Young’s report clearly failed to live up to these stated ethics.

According to that handbook, NPR journalists are supposed to “take great care to ensure that statements of fact in our journalism are both correct and in context,” and “rigorously challenge both the claims we encounter and the assumptions we bring.”

They’re supposed to “devote our resources and our skills to presenting the fullest version of the truth we can deliver, placing the highest value on information we have gathered and verified ourselves.”

The NPR guideline even states that its journalists must “Be able to identify the source of each fact” reported. Furthermore, they’re supposed to “explain why that person or organization is credible and authoritative.” Young did none of these things.

If she’d actually done her research, she would have discovered that a month earlier, Facebook had issued a public statement declaring the CCDH’s “Disinformation Dozen” report false, and setting the record straight with actual real-world data.

The following graph lists the top performing Facebook posts between mid-June to mid-July 2021. Not a single one of the “top disinformants” identified by the CCDH is on this list. Seeing how the 12 individuals targeted by the CCDH account for a mere 0.05% of vaccine content on the platform, it’s doubtful any one of us has EVER made this list. 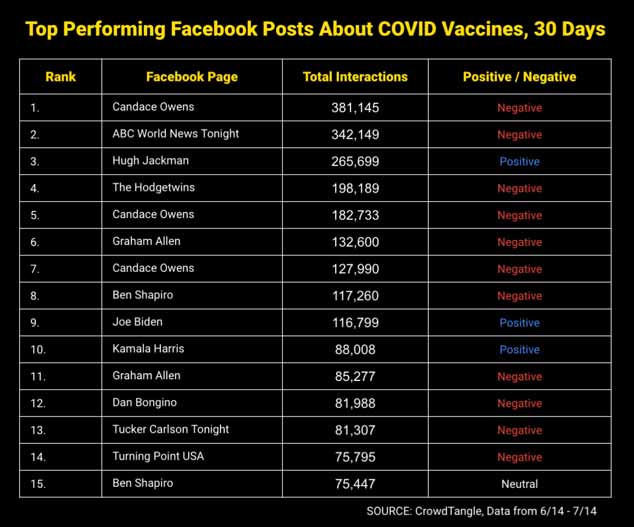 Young didn’t even cite the source of her defamatory statements about me, but there’s only one source, and that is the CCDH, and it’s far from credible and authoritative. As noted by Missouri Sen. Josh Hawley,8 the CCDH is a “foreign dark money group” that sprang out of nowhere to create lists of people to be censored into oblivion.

The CCDH also has ties to British intelligence, which is using sophisticated cyberwarfare tools against the public in order to shut down free speech,9,10,11 and technocrat-led institutions that support the Great Reset.

As noted by Hawley, before the CCDH started attacking individuals for speaking out about COVID jab dangers, this tiny, obscure outfit tried to get a number of conservative websites and news organizations banned and deplatformed.

“Who is funding this overseas dark money group — Big Tech? Billionaire activists? Foreign governments? We have no idea,” Hawley said in a July 20, 2021, Tweet,12 adding: “Americans deserve to know what foreign interests are attempting to influence American democracy.”

There’s no doubt in my mind that the CCDH was created for the purpose of political hit jobs. By way of its board members, the CCDH can be linked to several technocratic-led organizations that overtly or covertly support The Great Reset agenda, including the Trilateral Commission, the Atlantic Council, the European Council of Foreign Relations, Save the Children Fund (funded by the Gates Foundation and a partner of Gates’ GAVI Vaccine Alliance), the CIA and Microsoft.

For example, CCDH board member Tom Brookes was a spokesman for Microsoft during its 2007 antitrust case,13 and chairman Simon Clark is a senior fellow with the Center for American Progress.14

The Center for American Progress, in turn, is funded by dark money from a liberal Swiss billionaire named Hansjörg Wyss,15,16 who is also a Center for American Progress board member. The term “dark money” refers to funding by people and organizations who, for whatever reason, do not want to be identified, so donations are typically “laundered” through other organizations before reaching the intended receiver.

Wyss, who reportedly does not hold U.S. citizenship or even a permanent residency green card, was in 2016 caught violating political campaign donation rules when he donated $41,000 to Democratic political action committees (PACs).17

According to Capital Research,18 since 2018, Wyss has donated more than $1 million through a foundation he runs to the States Newsroom, described as “a bundle of partisan attack sites posing as impartial news outlets.”

States Newsroom was reportedly created by Arabella Advisors,19 a Washington D.C., consultant firm that appears to specialize in political hit jobs and furthering the political agendas of people and groups that don’t want their identities to be known.

Is the CCDH an Arabella Pop-Up Group?

InfluenceWatch has also detailed the links between Wyss, Arabella Advisors and mysterious front groups that serve no purpose other than to further a particular political agenda while pretending to be independent:20

“Arabella and its nonprofit network have been criticized as ‘dark money’ funders both for channeling hundreds of millions of dollars to left-wing organizations and for hosting hundreds of ‘pop-up groups’ — websites designed to look like standalone nonprofits that are really projects of an Arabella-run nonprofit.

In April 2021, the New York Times criticized Arabella’s ‘system of political financing, which often obscures the identities of donors,’ as ‘dark money,’ calling the network ‘a leading vehicle for it on the Left.'”

In a May 2021 article, reporter Hayden Lidwig described the inner workings of Arabella Advisors and the influence of the “dark money” — i.e., funding by unidentified people and groups — flowing through it:21

“My colleagues and I at the Capital Research Center have studied the Arabella network for over two years. Here’s how it works. Arabella’s nonprofits act as the left’s premier pass-through funders for professional activists.

Big foundations — including the Gates, Buffett, and Ford Foundations — have laundered billions of dollars through this network, washing their identities from the dollars that go to push radical policies on America.

But the real juice from these nonprofits comes from the vast array of ‘pop-up groups’ they run — called so because they consist almost solely of slick websites that may pop into existence one day and pop out the next, usually once the campaign is through.

We’ve counted over 350 such front groups pushing everything from federal funding of abortion to overhauling Obamacare to packing the Supreme Court.”

Lidwig points out that “Arabella is as dark as ‘dark money’ gets,” and that “When a special interest donor goes to Arabella, they’re expecting a political payoff.” The description of Arabella’s pop-up groups makes me think of not only the CCDH — again, the CCDH chairman is on the same board as dark money financier Wyss — but also AntivaxWatch.org,22 which co-sponsored the CCDH “Disinformation Dozen” report.

AntivaxWatch.org is even more opaque than the CCDH. It has no public face and no founding or funding information of any kind. It’s just an anonymously created organization that links to articles and reports by the CCDH and other extremist vaccine pushers.

Interestingly, the CCDH chairman, Clark, also has ties to former CIA deputy director Avril Haines, who just so happened to be a participant of Event 201.23 Event 201 was a coronavirus pandemic exercise24 held in October 2019 that foreshadowed and “played out” the draconian countermeasures implemented just a few months later, when COVID-19 appeared.

Bill Gates, Bloomberg’s Johns Hopkins School of Public Health and the World Economic Forum (WEF) were all participants. Since then, Gates and the WEF have made clear that the pandemic necessitates a “Great Reset” of the global economy and way of life.

Were you to create a flowchart of the personal and financial connections of the players mentioned in this article alone (and there are many more), you’d start to see how the pandemic narrative is being used to further The Great Reset agenda — which depends on vaccine passports as a control mechanism — and little else.

Sadly, NPR has apparently decided to sidestep its journalistic ethics, just like so many other mainstream media outlets, and to play the role of propagandist rather than being a source of accurate information that will help people make a sensible decision about their own health.

Originally posted on Drmercola.com  – stories now disappear after 24 hrs. because of censorship and threats.