The great SICKOUT spreads as airline pilots, railway workers, air traffic controllers, police, firefighters and the other people who keep society running say NO to vaccine coercion and threats 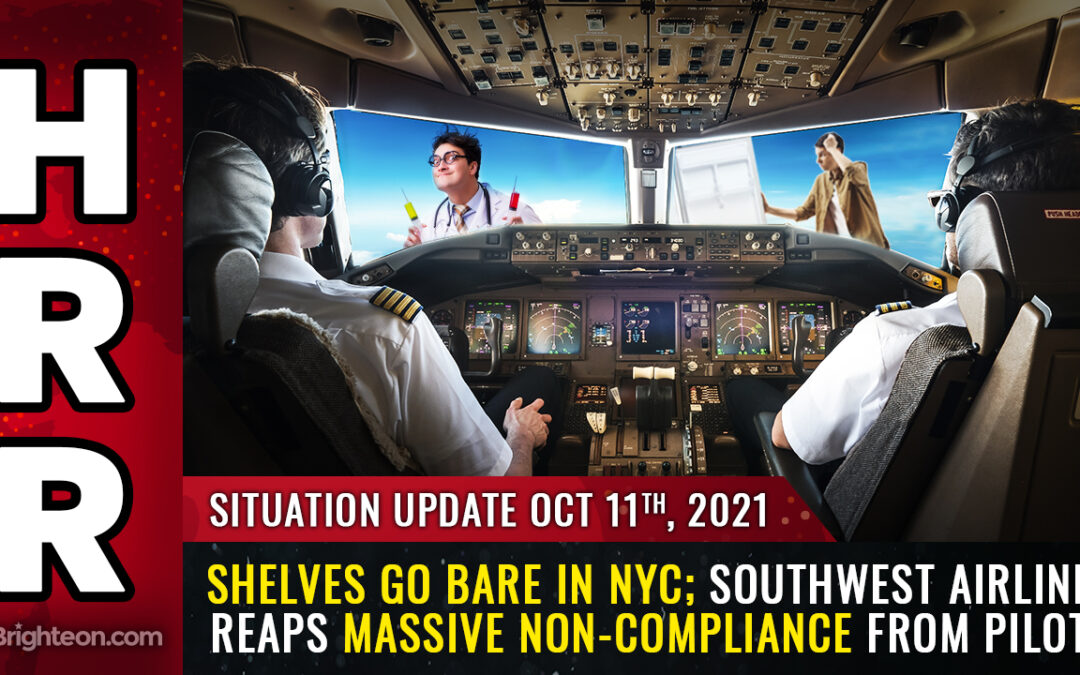 We are watching an incredible moment in human history as professionals all across the spectrum of societal job roles are saying, “NO!” to vaccine coercion and threats.

Southwest Airlines has now cancelled nearly 2,000 flights over the last three days because of a coordinated pilots’ “sickout” protest over the issue of vaccine mandates.

Southwest Airlines CEO Gary Kelly is committing massive fraud against his own pilots, falsely claiming there is a, “federal government COVID-19 vaccination directive” that forces him to demand vaccines for all his pilots. This is utterly false. No such mandate exists for private sector employees. OSHA hasn’t published any such rule. Kelly is simply bluffing along with Joe Biden, pretending there is a federal mandate that he knows isn’t law.

Not surprisingly, many of his company’s pilots are far smarter than Kelly seems to realize. Pilots tend to be sharp people, and they aren’t stupid enough to get injected with blood clotting spike protein injections when they already face heightened blood clot risks due to the time spent on the flight deck, in long-duration seated positions. That’s why they’re saying no to Kelly and walking away from their jobs, at least temporarily.

It isn’t just pilots that are resorting to this important form of civil protest, either: Firefighters, police officers, railway workers and many others are saying, essentially, “Let’s go Brandon” and telling the vaccine zealots to shove it.

Amtrack trains are now starting to be cancelled as their train crews are calling in sick as part of a coordinated “sickout” protest. The treasonous mainstream media is blacking out all such stories in the hope that the practice won’t spread. They want the American public to be ignorant, isolated and terrified of covid so that they can be easily controlled and euthanized (via vaccine).

Rumors are also circulating that American Airlines pilots and workers may be joining the sickout activities, and there’s little question this practice will spread from sector to sector as informed Americans declare my body my choice — get that deadly jab out of my sight!

We are now entering the era of mass non-compliance. This is the only option remaining when a tyrannical, pharma-infested medical police state has taken away legitimate science, human rights and the rule of law: DO NOT COMPLY with their extermination agenda. Walk away from your job and find work somewhere else, since there are a huge number of small business employers who desperately need informed people and who won’t require mass vaccinations.

Meanwhile, store shelves are going bare in NYC, where pharmacies like Walgreens and CVS are being pictured with “barren” shelves, all due to the supply chain disruptions caused by covid lockdowns that target transportation logistics personnel.

It’s very clear that the powers that be are engineering a total collapse of human civilization. Those who are stupid enough to take the spike protein injections will be destroyed physiologically. Those who refuse the jabs will be censored and fired from their jobs (economic warfare). The collapsing supply lines will impact everyone, resulting in extreme food scarcity and energy scarcity over the coming winter.

This is the plandemic, after all, and every stage of the collapse has been meticulously planned from the very start.

Get full details in today’s Situation Update podcast at Brighteon.com:

Find a new podcast each day at: