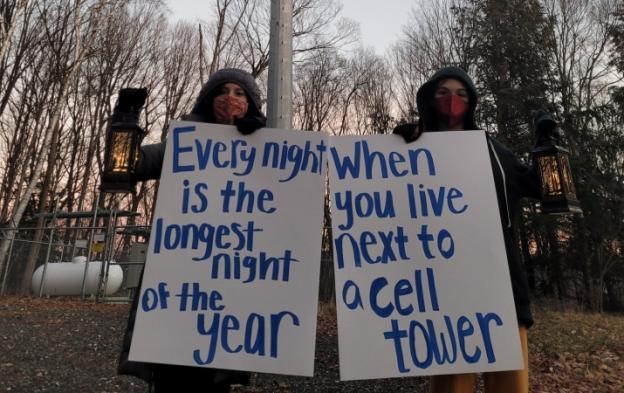 By Amelia Gilardi with Patricia Burke

Natural Blaze readers are familiar with the ongoing saga in Pittsfield, MA, where a cell tower installed in a residential area has caused tremendous harm to the community.  Residents continue to lobby to have the tower turned off so that they can return to their homes, while confronting the convoluted process that occurred in approving the tower, as well as the inadequacy of FCC and ICNIRP exposure limits.

Amelia’s story “5G Earth Day Countdown: Children — Amelia’s Terrible, Horrible, No Good, Very Bad Cell Tower Days” has been translated into multiple languages, and she has been contacted by other children and young people who have also experienced harm caused by wireless exposures. Her mom, Courtney, also told her story as part of the Mother’s Day series at Natural Blaze, where she encouraged parents to “Fight like a Mother.” She is still fighting.

Over the course of the year, the family produced creative and thought-provoking posters based around holiday themes, with the tower pictured looming behind them. The media has been following their story, and their efforts have garnered international attention.

The Gilardi girls and their Christmas poster from December 2020, one year ago.

Again this Christmas, they are still EMF refugees. – Patricia Burke

The Solstice and The Night Before Christmas

Amelia gives us her holiday 2021 update:

The iconic poem, “The Night Before Christmas” has been called “arguably the best-known verses ever written” and forever changed the way people viewed St. Nick and the magic of the holiday season.

The deceptively addressed Pittsfield cell tower, making my little sister, mom, multiple neighbors and myself sick, constructed illegally during the early days of the pandemic shutdown, has been called “arguably one of the worst cases of being blindsided” and forever changed the way people here view cell tower installations and wireless harm.

Like so many others who have become sick when cell towers have gone up near them, we’ve been forced to abandon the only home we’ve ever known. Others have been forced to sell their homes. Others in the hope of one day returning, sleep elsewhere, even if it means sleeping in their cars and tents to avoid the cell tower radiation.

Others do not have that option.

I read my poem at the December City Council meeting.

Next year we are hoping for less Tim Burton’s Nightmare and more of Clement Moore’s magic. – Amelia

‘Twas the night of the last city council meeting, and all through the chamber
We’d spent the last year and a half, speaking about cell tower danger

No action had been taken, despite everyone’s care
About seventeen residents in Shacktown, being harmed there

Headaches, dizziness, insomnia, while residents try to sleep in their beds
While visions of the Verizon cell tower, being removed, danced in their heads

And Councilor Connell, and Helpful Others, in their thinking caps
Trying to assist us, to be safely home, while others took naps

We told them, that out in the woods, we heard the noise of the crew
Another day of illegal construction, with a code violation or two

Residents received no notice, no letters; just misleading commercial address in the posting
But one person, somewhere, received a letter – the city went boasting

So we asked if the city could provide proof of these mailings,
It admitted it could not, there were multiple failings

At the 2017 ZBA hearing
It was a perfect open space for a tower, industry reps were cheering

No maps or no list of houses, or land owners nearby
No site visit to our neighborhood, and no one can tell us why

We called the Mayor, Verizon, Farley White, anyone who should care
But rules don’t matter for billion dollar corporations, you think this is fair?

More rapid than eagles, the tower it came
With workers and others, calling us names

The fact is, they don’t visit City Hall weekly to read every single committee’s notice,
Clearly, the law to give warning to all, is just bogus

One person turned up, and that is all that matters
Talk of equity, fairness and justice, is just chatter

Now the Board of Health is ready, to issue a Cease and Desist
Neighbors hurting and harmed, will educate and persist

We beg you to listen, to the science of wireless harm being released
And not the antiquated ’96 disinformation, of the paid industry mouthpiece

To councilors Morandi and Connell retiring, we will miss you so much
Thank you for your courage, we wish you good luck

To councilors remaining, I say with all might
Until we’re home safe – we won’t give up our fight,

So see you next year, at the next open mike
A healthy holiday to all,
And to all an EMF free night!   – Amelia Gilardi

Pittsfield Health Board to Make Action Plan for Cell Tower

Read the recent news report about the Pittsfield Tower here from IBerkshires:

“Some Board of Health members are eager to create an action plan for the 877 South St. cell tower. Since the 115-foot, Verizon tower was erected in August 2020, neighbor Courtney Gilardi has reported negative health effects and says she is living in alternate temporary housing because of it. She and her daughter, Amelia Gilardi, have regularly spoken during the open microphone segment of city meetings since.”[ ]

“Interim Director of Public Health Andy Cambi said they would have to consult with the state to see what kind of public nuisance or violation the tower could be considered for a stop order.”

“Never doubt that a small group of thoughtful, committed, citizens can change the world. Indeed, it is the only thing that ever has.” ― Margaret Mead

‘EMF/RF/5G IOUT Unscientific Science Of Twelve Ways We Cannot Annihilate The Oceans With EMF In 2022’ included a map of the United States of Wireless Woes, including Amelia’s family’s plight in Massachusetts.

The article discussed the issue of professional liars lying about RF safety, including the safety of smart meters.

The article noted that a Maine utility ranked dead last for customer satisfaction for 3 years.

Central Maine Power Co. has been ranked dead last in the nation, again, for electric utility residential customer satisfaction, according to a study released by J.D. Power.

Maine is the northeast state where the $200M smart grid failed spectacularly in 2017 due to a snow and ice storm.  In Maine. The storm response depended, as the industry well knows, on trucks, training, and trees- i.e. chain saws, and not on ‘smart meters’ telling the utility where power outages occur. Utilities can monitor power from the pole, and do not need wireless meters on homes. As the result of proof that smart meters do not increase reliability or timely storm restoration, the industry changed is terminology to “resiliency.”

The mandatory installation of wireless smart meters in Maine resulted in Ed Friedman, who has lymphoplasmacytic lymphoma, an incurable form of cancer, to request that his utility provide an analog opt-out meter, on the advice of his physician.

His request for reasonable accommodation without a punitive surcharge, like those of countless U.S. citizens, including those with EHS, was denied and is under litigation in federal district court based on claims under the ADA, Fair Housing Act and Rehabilitation Act.

Researcher Beatrice Golumb, MD, Phd, has indicated that the installation of a wireless utility meter is one of the most frequently reported variables connected with the acute onset of EHS, or microwave poisoning. No child should be asking Santa for safety in their own home.

Neither should a cancer patient like Ed Friedman in Maine be denied accommodation by a utility or its regulators. Yet these scenarios are widespread throughout the country.

The solstice marks the balance between darkness and light. Be on the right side of history-