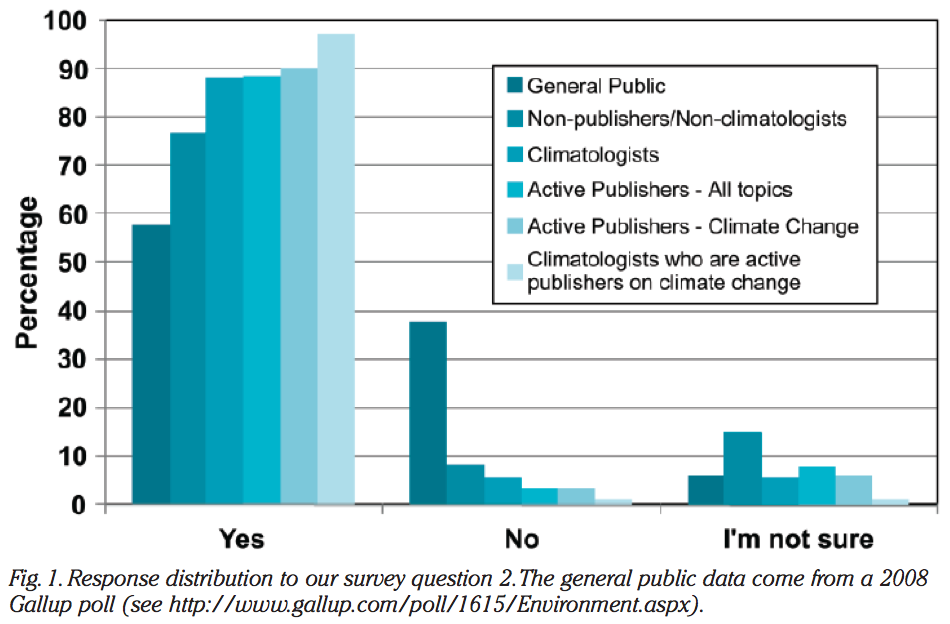 31,000 scientists reject global warming and say “no convincing evidence” that humans can or will cause global warming? But polls show that of scientists working in the field of climate science, and publishing papers on the topic: 97% of the climate scientists surveyed believe “global average temperatures have increased” during the past century; and 97% think human activity is a significant contributing factor in changing mean global temperatures. What is the significance of these statistics?

While polls of scientists actively working in the filed of climate science indicate strong general agreement that Earth is warming and human activity is a significant factor, 31,000 scientists say there is “no convincing evidence” that humans can or will cause “catastrophic” heating of the atmosphere.

This claim originates from the Oregon Institute of Science and Medicine, which has an online petition (petitionproject.org) that states:

We urge the United States government to reject the global warming agreement that was written in Kyoto, Japan in December, 1997, and any other similar proposals. The proposed limits on greenhouse gases would harm the environment, hinder the advance of science and technology, and damage the health and welfare of mankind.

There is no convincing scientific evidence that human release of carbon dioxide, methane, or other greenhouse gases is causing or will, in the foreseeable future, cause catastrophic heating of the Earth’s atmosphere and disruption of the Earth’s climate. Moreover, there is substantial scientific evidence that increases in atmospheric carbon dioxide produce many beneficial effects upon the natural plant and animal environments of the Earth.

To participate in the petition one only needs to mark a check box to show that one has a Ph.D., M.S., or B.S. degree, and then fill in the fields. Unfortunately, that means that anyone can sign the petition, whether they have a degree or not.

Since the results are not verifiable, there is no way to know how many signers have actually earned a degree.

Do ‘31,000 scientists say global warming is not real’? Maybe. But more importantly what is the significance of these signatures? The majority of signatures are engineers (10,102). 3,046 are in medicine. 2,965 are in biology, biochemistry and agriculture. 4,822 in chemistry and chemical engineering.

According to the data on the petition site, only 12% of those who signed the petition are indicated to have affiliation with atmosphere, earth, and environmental science. But there is no indication how many work in the field of climate science?

WHAT DO SCIENTISTS ‘THAT WORK IN THE FIELD’ REALLY THINK?

What is notable is that the polls indicate there is a perspective difference between working climate scientists and scientists not working in the field of climate. When one examines the experts in the field, one sees a significant divergence from the general view. So the more important question for us is, what do ‘expert’ climate scientists think?

Of those with expertise in climate science:

Asked if they regarded global warming as a very serious problem?

Climate scientists are skeptical of the media

Changing scientific opinion
In 1991 the Gallup organization conducted a telephone survey on global climate change among 400 scientists drawn from membership lists of the American Meteorological Association and the American Geophysical Union.

We repeated several of their questions verbatim, in order to measure changes in scientific opinion over time. On a variety of questions, opinion has consistently shifted toward increased belief in and concern about global warming. Among the changes:

97% of working climate scientists say the temperature is rising, and human activity is a significant contributing factor.