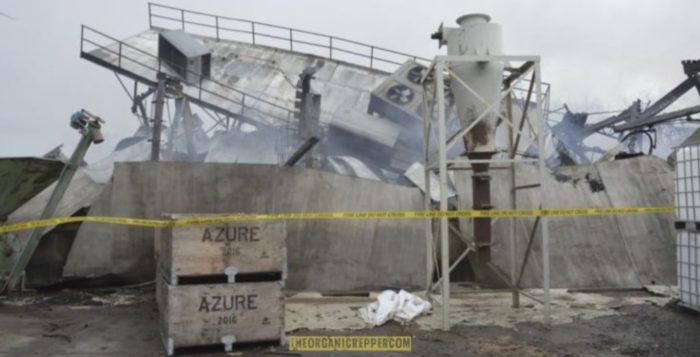 Another day, another “food fire.”

We’ve already witnessed the burning of the Yakima, Washington fertilizer plant. Then there was the burning of the fertilizer plant in North Carolina. A mysterious bird disease is allegedly spreading throughout the country (though the testing methods utilize the notoriously inaccurate PCR test). Fertilizer is no longer being shipped to the US from Russia. The breadbasket of Europe is in a state of war.

And now? Now, America’s largest independent, non-GMO, organic food distributor’s headquarters just went up in smoke. You may have heard of them – Azure Standard. We’ve covered this business before when the state of Oregon decided they were going threaten the organic farm with the spraying of Roundup all over their crops (due to an alleged Canadian thistle problem).

Azure Standard operates by means of drop-off locations throughout the country.

Patrons purchase their products online and then are able to pick up the food items at the nearest drop-off location near them. They sell a wide range of products from Roundup-free grains, meats, teas, baby foods, and more.

Just about any type of healthy food that one could want is offered for sale by Azure Standard. For those who are concerned with the additives or pesticides used with commercially processed foods, Azure Standard offers an easy solution. It’s because of this that Azure Standards has become such a mainstay in the health-conscious American’s diet.

They were influential in pointing out the dangers of GMO foods in the very early stages of the GMO conversation, as well as pointing out many of the consequences of increasing levels of pesticides being applied to the American food supply. Not only have they helped millions of Americans through the bringing to market of foods devoid of these alterations/additions, but they’ve also helped through spreading knowledge and awareness.

The headquarters facility has been deemed as a total loss.

How To Grow Half Of Your Own Food (Ad)

(Sounds like a good time to learn how to preserve the food that you’re growing this year. Check out our free QUICKSTART Guide to home canning to learn more here.)

Oils, honey, and vinegars will all be temporarily impacted as a result. You can see the full text of the Azure Standard’s statement after the fire below.

While Azure Standard isn’t as large as Big Food companies, its commitment to non-GMO, organic foods means no one ever has to worry about mRNA foods when one buys their products. Now, their ability to provide that food to the American people has been hampered.

I highly recommend you check into Azure Standard’s products to not only provide your family with healthy food during this time but to help out a fantastic company during such a tragic time. You can check out some of their healthy food options HERE. They truly do have a fantastic selection.

Losing a major American farm as warnings of an incoming global famine? Fantastic.

In a time during which there are repeated warnings that a global famine is on the way, such a strike against a major American farm and food distributor is a major setback. It should be pointed out that there are numerous warnings that American infrastructure is being on snooped by “advanced persistent actors” who are performing cyber reconnaissance.

As has been demonstrated multiple times before, a cyber attack can most certainly cause real-world problems, such as fires. You don’t necessarily have to have an actor on the ground with a Bic lighter and a can of kerosene. Attacks against food supply chains can easily take place with a computer mouse and a keyboard.

This is unlikely to be the last attack that we see on the American food supply this year. It would be prudent to do what you can to ensure that your family can remain well-fed in the times to come. Consider your preps as a very inexpensive and durable form of “famine insurance.”

So, just to recap, we now have a problem with:

I guess we should all just start eating bugs?

What are your thoughts on this fire? Do you think that the true culprit will be found? Let us know what you’re thinking in the comments section below.

Aden Tate is a regular contributor to TheOrganicPrepper.com and TheFrugalite.com. Aden runs a micro-farm where he raises dairy goats, a pig, honeybees, meat chickens, laying chickens, tomatoes, mushrooms, and greens. Aden has three published books, The Faithful Prepper,  The Prepper’s Guide to Post-Disaster Communications, and Zombie Choices. You can find his podcast The Last American on Preppers’ Broadcasting Network.