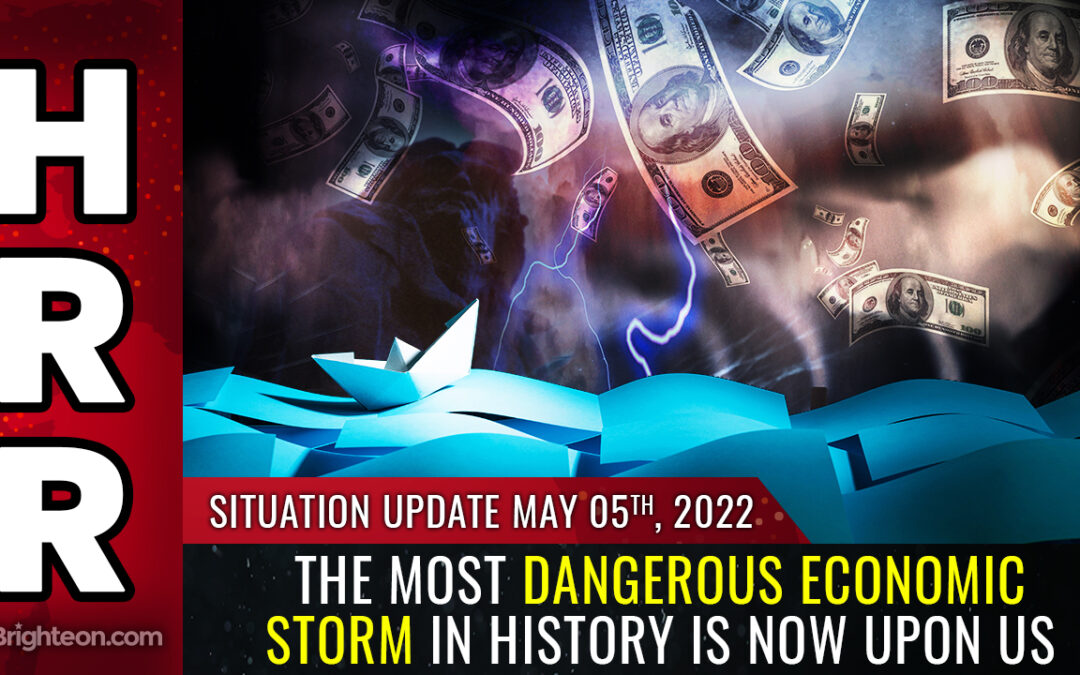 The most epic and dangerous economic storm in history is now upon us… and there’s no way out. The central banks and government kleptocrats have set the trap for themselves, and now they’re caught with no escape.

Yesterday the Fed just raised interest rates by 50 basis points (0.5%) in an effort to stem the tide of exploding inflation. But with real inflation at anywhere from 15% – 25%, the tiny gesture of 0.5% will have little effect at halting inflation.

It will, however, have a huge effect on real estate markets which, I publicly predicted three weeks ago, have already reached their peak. (I called the “top” of the real estate market around April 18th.) Higher interest rates mean higher costs to service mortgage loans, and that makes it more difficult for potential buyers to qualify for bank loans on overpriced housing and land. The result will be swift: A rapid unwinding of the housing bubble that was catapulted into place by absurdly low interest rates and seemingly endless money printing.

But that’s only the beginning of the news of the economic storm that’s now upon us.

The US trade deficit has now soared to nearly a $110 billion deficit in one month (March), which means the US simply isn’t exporting much, compared to all the things it is importing. This is a frightening indicator for the state of the US economy in the long run.

In addition, as CNBC is reporting, a shocking new economic report reveals that US worker productivity fell by 7.5% in the first quarter of 2022. That’s almost like a plunge off a cliff. Yet even as worker output is plunging, worker costs are skyrocketing. So America’s businesses and manufacturers are paying more money for less productivity. Prices go up, output goes down. Not a good thing for the economy.

CNBC is also reporting that e-commerce activity is falling sharply, and e-commerce platforms are getting hammered in today’s 1,000+ point plunge in the DOW, with some stock prices for e-commerce giants trading down as much as 17% in one day.

With mad money printing continuing at a panic pace, it’s only a matter of time before the entire debt-based fiat currency deception machine implodes, leading to what financial analyst Gregory Mannarino predicts could be up to 80% losses in stocks, bonds and other dollar-denominated assets. See the Mannarino interview here:

That same channel on Brighteon, “Liberty and Finance,” also interviewed Andy Schectman, CEO of Miles Franklin, a large retailer of precious metals. In that interview, Schectman unveils his stunning analysis (which I agree is accurate) about how BRICS nations are poised to unleash their own gold-backed digital currency that will instantly unseat the dollar as the world reserve currency.

Importantly, Schectman explains this will happen in one day, without warning, with no exits for those left holding dollars. This is a very important interview to pay attention to (I’m going to be interviewing Schectman in a few weeks to get even more details about his analysis):

Bottom line? Andy nails it. He gets the big picture, and you should heed his warning or pay the price of losing literally all your dollar assets when the music stops. The days of dollar dominance are rapidly coming to an end. And that means the days of easy money, affordable consumer goods, low-cost loans and easy credit are also nearly over.

Adding to the shocking turn of global events, the governments of both Germany and Switzerland are now publicly urging their citizens and businesses to stockpile essential supplies and prepare for scenarios such as power grid collapse or nuclear war.

As reported by Free West Media:

German Interior Minister: Citizens should start hoarding emergency supplies – Against the background of the Ukraine war, Federal Interior Minister Nancy Faeser advised citizens to take survivalist precautions in the event of a crisis.

This not only affects technical issues, “but also supplies for food, medicines or medical supplies”. There are still 599 nuclear shelters in Germany. There are also some that are used differently today. “It makes sense to reactivate some of them,” Faeser said.

And in Switzerland, even the mainstream corporate media there is reporting the near-panic at the highest levels of government: “Swiss companies told to brace for electricity shortages,” blares the SWI (Swissinfo.ch):

In the absence of an electricity agreement with the European Union, such a scenario is likely if large power plants fail in Switzerland or abroad.

A power failure could cause damages of up to CHF4 billion ($4.3 billion) a day, the newspaper notes, citing government figures.

Switzerland risks significant problem guaranteeing electricity in the short and medium term, especially in winter, in the absence of progress on a deal with the EU, according to experts.

Nowhere in this article, of course, do they mention that Switzerland has violated its traditional position of neutrality and is now all-in with NATO nations that are sending weapons to Ukraine and carrying out economic weapons of mass destruction against Russia, the primary provider of natural gas that powers Europe’s electrical grid (including, to some extent, the power grid of Switzerland).

In essence, Germany and Switzerland are warning their citizens to prepare for an energy and economic crisis that was artificially created by their own governments. That’s the sheer stupidity of progressive socialist Europe, which will almost certainly see the complete destruction of the Euro currency in the next year or so, only adding to the economic suicide of the West.

Western Europe is about to experience an economic hellscape of their own making, yet their political leaders continue to issue destructive, insane decisions on a daily basis, no matter how stupid the ideas are. Anything that can be said to “punish Russia” — even if it severely harms European citizens — is being unleashed without any consideration whatsoever of long-term repercussions.

Get full details on all this and more in today’s Situation Update, which also expresses great relief for all men now that Joy Behar has announced she’s on a sex strike to protest the overturning of Roe vs Wade. Please God, dear God, give Joy Behar the strength to extend her sex strike to the end of time…

Discover more information-packaged podcasts each day, along with special reports, interviews and emergency updates, at:

Join the free NaturalNews.com email newsletter to stay alerted about new, upcoming audiobooks that you can download for free.

Download my current audiobooks — including Ghost World, Survival Nutrition, The Global Reset Survival Guide and The Contagious Mind — at: