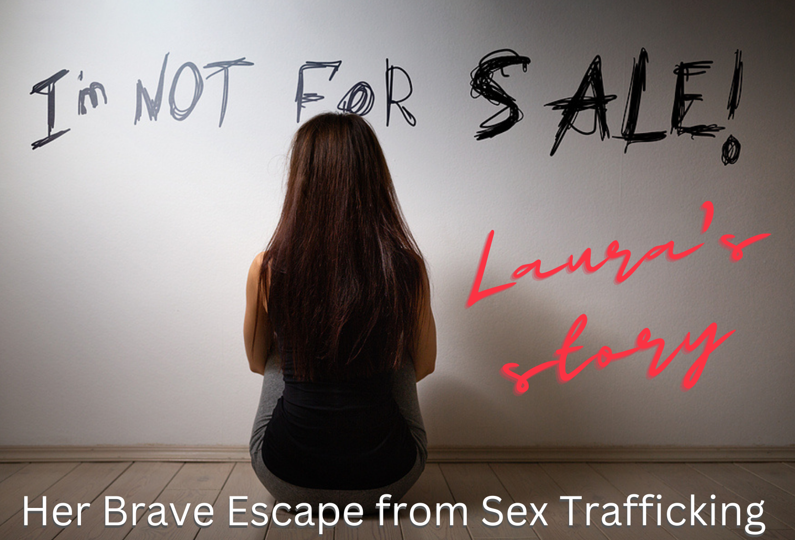 Recently I came in contact with a beautiful soul who has been through the wringer to say the absolute very least. Sex trafficked, abused, and homeless – she still has her chin up and sees the potential for good in this world.

She has been down some roads most in this world, thankfully will never experience, and still chooses to shine with the ultimate goal of stabilizing her own life and in turn helping others in the same situations.

Laura was born to a mother who loved her very much but due to mental health issues her mom ended up losing custody of her and her four siblings to the state child protective care system. They were not able to stay together and were sent to different foster homes.

Through a series of misadventures, Laura ended up homeless and on her own at just 14 years old.

With nowhere to go, Laura slept on park benches and with friends when possible. She had no way to get ahead or go to school and establish her start in life as most teens do.

As if this rough start wasn’t enough, living mostly on the streets at 14, she had the misfortune of coming across the wrong shady character and was raped. She became so fearful of it happening again that she began experimenting with MDMA not just to escape but mainly to try and stay awake at night so no one could sneak up on her and hurt her again.

This led to an addiction and once again to consorting with the wrong crowd who didn’t see her as a person but as a pretty face who was worth something to them. She was grabbed and held against her will and sex trafficked.

Sex trafficking is often glossed over in Hollywood. There is nothing sexy or glamorous about it. Its degradation, humiliation, intimidation, and fear. It leaves you with anxiety, shame, guilt, and trauma if you get out at all. In Laura’s experience, she was kidnapped, trafficked, beaten, and raped. She was treated as less than human, drugged and often kept in a dog kennel in the basement until someone purchased her.

This took place in various cities including Miami, Fort Lauderdale, and Chicago, Illinois. This abuse and exploitation went on for years.

Laura escaped twice from her captors.

The first taste of freedom was short-lived due to still having no resources or a place to go, she was unfortunately dragged back into this horrid underworld of sex slavery no one should ever have to endure.

Laura is a fighter. She never gave up on herself, nor on her belief and faith in the divine. She knew she deserved better than this and she made her way out of it, escaping a second time against all odds. Most are not this lucky.

Now 33, Laura is clean and drug-free. Her belief in God is strong.

After getting away the second time she met and married her husband, Robert. They are a loving couple and do not want to be separated as Laura has said to me that he is indeed the only thing that feels like home to her and makes her feel safe and valued.

Both Laura and her husband work. They do all kinds of jobs including:
Painting
Landscaping
Construction
Demolition
Cleaning and organizing
Pressure washing
Dog Walking
Dog grooming
Jewelry creation
(And so much more! – Laura has an amazingly beautiful singing voice!)

Laura has also started her own jewelry business and created a page on Facebook. https://www.facebook.com/HeavenlyMadeBellaIsyDesigns

They have gotten to a point where they make enough to pay rent but are scraping by and unable to raise enough to get first, last, and security so that they can get into an apartment and really stabilize their lives.

Laura has reached out to every charity organization, abused women’s shelter, and trafficking organization she can find. In fact, it is how we are becoming friends. I am the Volunteer Social Media Coordinator for Homeless Helping Homeless in Tampa, FL. The problem is the organizations that could possibly take her cannot take her and her husband together. Single females only and it is for the duration of a full year. After being trafficked and abused so badly, Laura is terrified to be without her husband so this is not a viable option as it would be damaging to her mental health and wellbeing.

Laura and Robert are not looking for handouts. They are genuine good-hearted people who are trying their best to solve these issues themselves and simply could use a hand up.

If you are in the Tampa, Florida area and have work that you need to be done, piece work, contract, or permanent steady employment they would be very open to talking with you. Until then they also have humbled themselves and are accepting love donations at the following addresses:

***Laura has shared her dream of opening a not-for-profit where she is able to help assist both women and men in escaping the world of trafficking and to be able to temporarily support them as they work their way back to normalcy and back into society. To me, this is a tremendous humanitarian goal I would love to see her accomplish. After talking with her? I believe she can do just that.****

For right now Laura continues to be a voice for the voiceless #TheSpeakOutProject. You can help too. Join the fight against human trafficking. www.Speakoutactreclaim.org

Below is a picture of Laura and her husband Robert today.

I wish you both the very best in life from here forward.
Sincerely,
Sarah