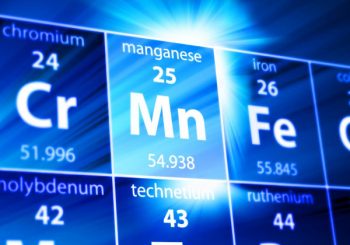 Although manganese is essential to our overall health, too much can be dangerous. Overexposure to manganese can cause cognitive, motor, and behavioral deficits in children.

Manganese (Mn) is an essential trace element. It naturally occurs in many foods, including potatoes, pineapples, brown rice, mussels, and spinach. It can also be purchased as a dietary supplement. (1)

Generally, the human body contains between 10 to 20 mg of manganese. It is mostly found in bones, but manganese is also present in the kidneys, liver, brain, and pancreas. The body regulates the amount of manganese it contains through both absorption and excretion. (1)

Manganese is important for several bodily processes, including metabolizing amino acids, cholesterol, glucose, and carbohydrates. It is also involved in blood clotting. It is rare for humans to have a manganese deficiency, but excessive manganese causes many health problems. (1)

When the human body is overexposed to manganese, it can result in manganese toxicity. This affects the central nervous system and can lead to a long list of health problems, including the following:

A review of 10 studies on manganese toxicity revealed dangers for children and teens. The review found that overexposure to manganese negatively impacts children’s cognitive, behavioral, and motor development. (2)

Another study in the review investigated how exposure to manganese impacts children’s motor skill development. Researchers in this study found that manganese exposure was related to impairments in motor coordination, hand dexterity, and odor identification. (2)

How To Avoid Manganese Toxicity

With the serious effects of manganese toxicity, it’s important to avoid it. This is especially true for infants and children, who absorb larger amounts of manganese than adults. (1)

There has been no evidence to suggest that manganese toxicity can be caused by eating large amounts of dietary manganese. Those with occupations involving inhaling manganese dust, such as welders and minders, may be at risk for manganese toxicity. (1)

People whose drinking water contains high levels of manganese are at greater risk for overexposure. You can purchase kits to test the presence of manganese in your drinking water at home. Water should not contain more than 0.5 mg/L of manganese. If the manganese levels in your water exceed this, you can remove manganese from the water with point-of-entry treatment devices. (1, 3)

An iron deficiency increases how much manganese you absorb, so it puts you at a higher risk for manganese toxicity. If you believe you have an iron deficiency, you should make an appointment with your healthcare provider. They can test you and advise you on how to get your iron intake to a healthy level. (1)

Amelia Harris is a writer and eco-activist, interested in health and all things esoteric, with a passion for sharing good news and inspiring stories. She is a staff writer for Wake Up World.