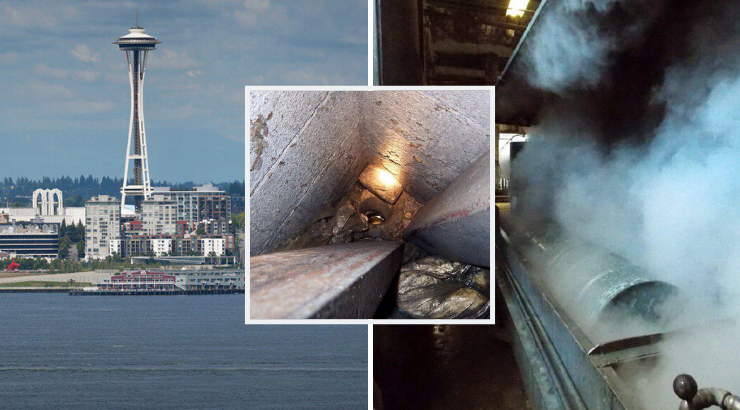 According to a 36-count grand jury indictment, a Seattle company used a hidden drain to dump a highly-corrosive chemical solution directly into the sewer system.

After “a sensitive sewer flow meter tipped them off to something strange,” agents sent a robot into the sewer to investigate, the Seattle Times reports.

Inside the sewer, the robot’s camera recorded a white stain of unknown origin and, according to a federal indictment handed down earlier this month, federal agents executed a search warrant after real-time monitoring equipment they installed indicated an unusual spike in the water’s pH.

During the search, a portable pump covered in a high-pH liquid and a hidden drain that had never been disclosed were both discovered.

It turns out, both the company’s owner and the manager of the plant, who happen to be cousins, have been lying to regulators since at least 2009, according to the indictment. The scheme was discovered in 2018.

The Seattle Barrel and Cooperage Company collects used 55-gallon industrial drums and resells them after undergoing a reconditioning process that involves washing them in a tank full of highly-corrosive chemical solution. The family-owned company is legally obligated to dispose of the caustic solution properly.

Louie Sanft and John Sanft have both charged with criminal conspiracy as well as 29 counts of violating the Clean Water Act—one for each of the 29 times that investigators documented the waste being discharged into the sewer system in 2018 and 2019—and are expected to appear in court next month.

The century-old company is laying the blame on a former employee whose employment was terminated earlier this year, according to Seattle Barrel’s lawyer, Harold Malkin. That employee hasn’t been named or charged.

Louie Sanft’s lawyer, Angelo Calfo, blames the former employee as well and says that the Justice Department and the EPA both made a “serious error” in charging his client.

Louie had no motive to do this. Company practice and policy was to have the tank water boiled down and evaporated. Any sludge from the tank would be transported for proper disposal. This case is about a former employee who cut corners for his own gain.

The county began monitoring Seattle Barrel’s activities via “cover monitoring” after a King County Industrial Waste employee observed the plant manager dump an oily substance directly into a sewer. The company was fined $55,250 in 2013 after the county discovered violations of its wastewater discharge permit. After various improvements, the company claimed to be a “zero discharge” facility but, according to the indictment, those improvements didn’t involve the caustic solution that the company has been dumping directly into the sewer system.
Seattle Barrel was also required to pay $30,000 in fines after the Washington Department of Ecology discovered the company was “failing to identify caustic wastewater as a hazardous waste, missing labels on hazardous waste containers and lacking measures to prevent the escape of hazardous liquids.”

At a time when we are searching for strategies to protect Puget Sound and improve water quality for fish and wildlife, we need companies to do their share—not scheme for ways to pollute in private.