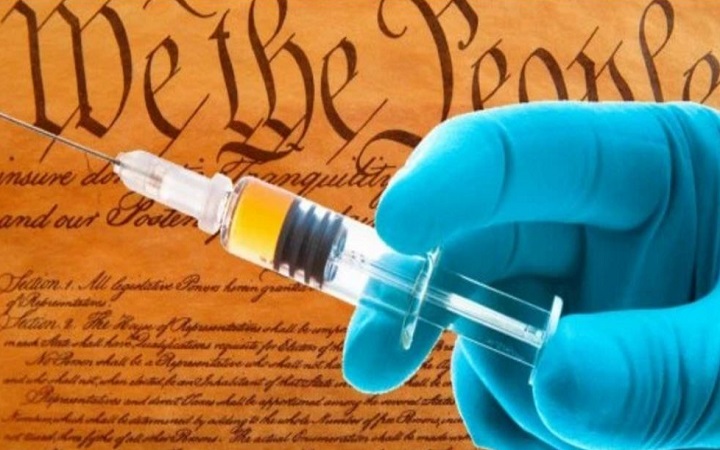 A bill prefiled in the Arizona House would strengthen parental rights to make vaccination decisions and push back against any future federal vaccine mandates.

On December 11, 2019, State Rep. John Fillmore (R-Apache Junction) prefiled House Bill 2050 (HB2050), which would give parents of children who are “pupils” under Arizona law the sole right to decide whether or not their children are vaccinated. It would also prohibit schools from requiring that pupils receive the recommended vaccinations and prohibit schools from refusing to admit, or from otherwise penalizing, pupils who have not received them. However, the bill would allow a school to exclude a pupil if he or she lacks a vaccination for a disease for which there is an active case at the pupil’s school and the public health department has declared an outbreak of the disease in the area. The bill would additionally eliminate a requirement that children be vaccinated in accordance with the recommended schedule in order for their parents to received cash assistance from the state on their behalf.

Passage of HB 2050 would strengthen parental rights and make enforcement of any future federal vaccine mandates more difficult. Vaccine mandates, which are based upon CDC recommendations, currently exist at the state level and apply only to children. States have historically allowed various exemptions from the mandates, but exemptions are increasingly being rolling back or eliminated, with recent examples of this in California, Washington, Maine and New York. Furthermore, there’s reason to believe that the federal government may impose mandates shortly and that the mandates may not be limited to children.

Mandates are increasingly being issued at a federal level around the world, such as in Argentina, Italy and France. [1] [2] In the U.S., in February of 2019, Dr. Scott Gottlieb, then Commissioner of the FDA, made comments to CNN indicating that the federal government has the authority to mandate vaccines and could step in with mandates if states don’t require more children to be vaccinated. [3] Gottlieb resigned as FDA Commissioner in May of 2019, shortly after making the comments, and joined the Board of Directors of Pfizer, Inc., a vaccine manufacturer, in June of 2019. [4] His departure from a high-level CDC position into a high-level position with a vaccine manufacturer was not unusual. Julie Gerberding is an earlier example of this “revolving door.” She was the director of the CDC from 2002 to 2009 and accepted a highly paid position as president of Merck’s vaccine division only about a year after leaving the CDC. [5]

In the U.S., the feds have explicitly stated the goals of increasing overall vaccination rates and increasing rates specifically in the adult population. These goals are discussed in the National Vaccine Plan (NVP) and the National Adult Immunization Plan (NAIP), respectively, which can be found on HHS’s website. [6] [7] The goals stated in the NVP include, among others, developing new vaccines. [8] The goals set forth in the NAIP include strengthening the “adult vaccine infrastructure”, increasing access to adult vaccines and increasing “community demand” for adult immunizations. [9]

There are many reasons to be concerned about vaccine mandates. Several of them are discussed below.

The government has removed liability for vaccine manufacturers and those administering vaccines.

Although almost all U.S. manufacturers are subject to product liability, the federal government has lifted this burden from the manufacturers of most vaccines Americans receive. Liability has also been lifted for those administering the vaccines. This resulted from the 1986 passage of the National Childhood Vaccine Injury Act (NCVIA) and subsequent amendments to the Act, along with the 2011 U.S. Supreme Court decision in Bruesewitz v. Wyeth. [10]

The 1986 Act also created the National Vaccine Injury Compensation Program (NVICP), a special system outside of the normal litigation process for claims of harm caused by vaccines, in which the government is the defendant, not the vaccine manufacturers. Any compensation granted by the NVICP is paid by the public, through a surcharge on vaccines, and not by vaccine manufacturers. Over $4 billion has been paid out to date under this system. [11]

The lack of liability for vaccine manufacturers creates an obvious disincentive to make vaccines as safe as possible.

The normal rules of discovery don’t apply to vaccine manufacturers.

During product liability litigation, companies generally must respond to discovery. This requires them to produce relevant records, such as e-mails and research records, and to answer interrogatories and requests for admissions.

Discovery is the process through which damaging evidence has come to light in recent high-profile product liability cases, such as those involving Bayer/Monsanto’s Glyphosate, Johnson & Johnson’s talc products and Merck’s Vioxx. Despite how useful discovery is in uncovering relevant evidence, the government has also given vaccine manufacturers a pass in this area. Discovery is not permitted in the NVICP process and, pursuant to the NCVIA, vaccine manufacturers cannot be made to submit to discovery in connection with claims of vaccine injury. Like the lack of product liability, this lack of claimants’ right to discovery is nearly unique to the vaccine industry.

The expanding number of vaccines being administered has prompted safety concerns. For example, because aluminum is an ingredient in multiple vaccines, concerns have arisen about whether receiving all of the vaccines on the recommended schedules can cause aluminum toxicity. Some research points to this possibility. A recent study in the Journal of Trace Elements in Medicine and Biology concluded that the current CDC childhood vaccine schedule is 15.9 times over the recommended safe level of aluminum when researchers adjusted for body weight and also estimated that a child who followed the vaccine schedule would be in a state of “chronic toxicity” for 70% of the child’s first seven months of life, 149 days from birth to seven months. [14] [15]

Many Americans are unaware that the CDC has both a childhood vaccine schedule and an adult one. [16] A person receiving all of the recommended doses on both schedules would receive a lifetime total of approximately 149 vaccine doses. [17] Further, hundreds of new vaccines are in the developmental process and it is expected that many will be added to the CDC’s schedules.

Once the CDC’s vaccine schedules are mandated by federal law, Americans will continue to be subject to them even as more vaccines and doses are added, in a dangerous slippery slope.  Additionally, federal vaccine mandates may open the door to federal mandates for other medical treatments and procedures without informed consent.

Vaccines safety testing is far less rigorous than the public may believe.

The public would likely be surprised to learn that the safety testing required of vaccines, a product mandated to be injected into children, is far less rigorous than that required for drugs. The FDA has classified vaccines as “biologics” rather than “drugs,” thereby allowing vaccine manufacturers to forego the multi-year, double-blind inert placebo-controlled studies required for drug approval. [18] [19] Additionally, vaccines are subject to very short periods of monitoring for adverse reactions, often of 14 days or less. [20] [21]

Further, the CDC’s childhood vaccine schedule includes recommendations that children receive multiple vaccines in the same office visit, but the CDC hasn’t required safety testing of the vaccines in these combinations. [22]

The CDC also hasn’t required studies comparing the health outcomes of children vaccinated in accordance with the CDC’s schedule with those of unvaccinated children. Parents may wish to conduct their own review of the research on this topic. On July 18, 2019, Children’s Health Defense (CHD) posted an article by Robert F. Kennedy, Jr., Chairman of CHD, entitled “Fully Vaccinated v. Unvaccinated – A Summary of the Research” summarizing the results of multiple vaccinated/unvaccinated studies conducted since 1999 by independent scientists and research institutions and, according to the article, “[t]hose studies indicate high incidence of chronic diseases and brain and immune system injuries among vaccinated compared to unvaccinated cohorts.” [23]

Vaccine mandates place decision-making regarding a complex medical intervention in the hands of bureaucrats.

The scientific issues related to vaccines are highly complex. Individuals may wish to retain the right to make vaccination decisions based upon the advice of their chosen medical professionals rather than relinquishing this right to bureaucratic mandates. Some additional issues to be considered in connection with vaccines include the following: their risks of adverse reactions [24]; their toxic or concerning ingredients (such as aluminum, mercury, antibiotics, formaldehyde, Polysorbate 80, MSG and aborted human fetal tissue) [25]; their surprisingly low effectiveness rates [26] [27]; their diminished effectiveness with subsequent doses [28]; the strain replacement and strain enhancement they can cause [29] [30]; the existence of vaccine strains of viruses [31]; the viral shedding that can occur following some vaccinations [32] [33]; evidence linking them to conditions such as autism [34] [35], autoimmune disorders [36] [37], allergies [38] and other medical conditions; and how their use for one infectious disease can increase the incidence of other infectious diseases, such as the incidence of shingles increasing from use of the chickenpox vaccine [39]. This list is not exhaustive.

As we have seen with marijuana and industrial hemp, federal regulation becomes ineffective when states enact contradictory policies. If multiple states ban mandatory vaccinations or pass laws that conflict with the CDC’s recommended schedules, it will become difficult for the federal government to enforce future federal mandates. Such state laws will also undermine the federal narrative and make it more difficult for the feds to generate support for nationwide mandatory vaccine policies.

HB2050 will be officially introduced and referred to a committee when the legislature convenes on Jan. 13. It must pass committee by a majority vote before moving forward in the legislative process.