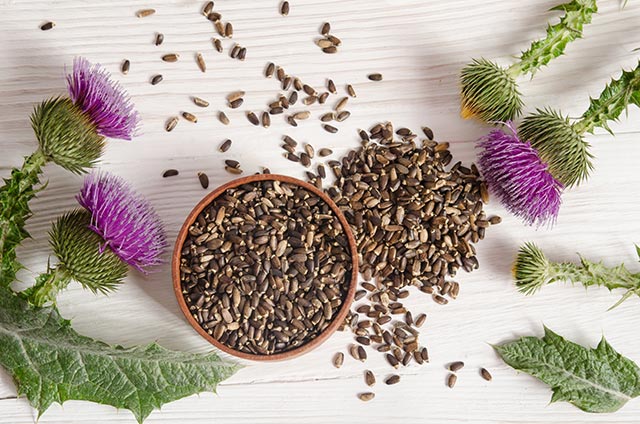 Milk thistle is an herb derived from the milk thistle plant, Silybum marianum. It is used in traditional Chinese medicine to clear heat, remove toxic elements from the body, soothe the liver and promote bile secretions. The detoxifying properties of milk thistle are so potent that the herb is used to protect the liver from snake bites.

The main active ingredient in milk thistle is silymarin, a flavonoid with potent antioxidant and anti-cancer properties. In a study published in the journal Oncology Reports, researchers from Kongju National University in South Korea found that silymarin can reduce tumor growth by decreasing the expression of pro-cancer proteins involved in mitogen-activated protein kinase (MAPK) signaling. The MAPK signaling pathways play an important role in the regulation of cell proliferation, differentiation, survival and death.

To investigate the anti-cancer properties of silymarin, the researchers examined changes in the expression of proteins involved in MAPK signaling in gastric cancer cells. Using western blot analysis, the researchers found that silymarin increased the expression of the apoptotic activator Bax, activated the tumor suppressors JNK and p38, and decreased the levels of the antiapoptotic proteins ERK1/2 and Bcl?2 in a dose?dependent manner.

By inhibiting the phosphorylation of ERK and Bcl-2 and activating p38, JNK and Bax in human gastric cancer cells, silymarin was able to induce cancer cell death and prevent tumor growth.

“The present study indicated that silymarin is highly promising for the development of gastric cancer medications as it inhibits [cancer] cell growth and tumor generation by inducing apoptosis,” the researchers wrote in their report.

More studies on the anti-cancer properties of silymarin

Silymarin fights cancer in several ways. For one, it has powerful antioxidant and anti-inflammatory properties that allow it to counteract harmful free radicals and reduce oxidative stress. Oxidative stress is associated with the development and progression of cancer as it enhances DNA mutation and increases DNA damage, genome variability and cell proliferation.

Silymarin also prevents toxins from binding to cell membrane receptors and activates the production of glutathione in the body. Glutathione is an antioxidant that can potentially make tumors less sensitive to conventional cancer treatments. (Related: Glutathione is the body’s most important antioxidant.)

Moreover, silymarin decreases the production of matrix metalloproteinases (MMPs) – enzymes that promote the spread of cancer cells. Studies show that silymarin helps suppress the invasiveness of bone cancer and prevents the progression of liver cancer by interfering with the production of MMPs.

Silymarin can also lessen the adverse effects of anti-cancer drugs. In a study of children with acute lymphoblastic leukemia, researchers found that taking 160 to 320 mg a day of silymarin for 28 days reduced liver toxicity caused by chemotherapy. In another study, the flavonoid helped restore liver function in breast cancer patients who were treated with the chemo drug, carboplatin.

Silymarin is now sold in tablet, capsule or powder form. Milk thistle products are considered generally safe for consumption. If you wish to use silymarin supplements, consult with a trusted natural health practitioner on how best to take them so you can maximize silymarin’s benefits.