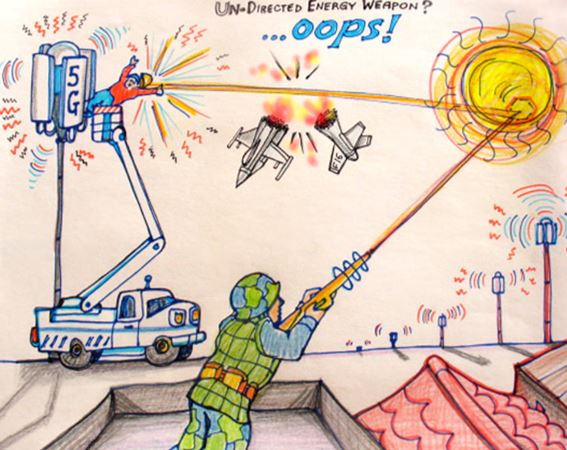 On the insanity planet:

…when tools of warfare hitchhike a ride on a reusable rocket being launched into space, supposedly to provide global wi-fi … it is promoted as some mark of progress.

New Zealand, Solstice 2021 Protests Against Weaponization of Space, Did You See This is The News? (No, You Didn’t)

“and the New Zealand rocket lab should not be selling out to the American Military Industrial Corporation” – Laurie Ross, Nuclear Free Peacemakers

At the solstice on June 21, 2021, New Zealanders gathered in Auckland to protest the weaponization of space, led by the United States.

“’STOP Militarisation of Space’ New Zealand ‘Rocket Lab’ protest 21 June 2021 in Auckland – It asks government and Space Industry CEO to refuse US military Space Missile payloads for warfare combat targeting. Speakers also expose dangers to health and environment from the proposed 100,000 satellites for civilian/military dual purpose. This public event reinforces NZ Nuclear Free Peacemaker policies and the Outer Space and High-altitude Activities Act. However, (OSHAA) regulations must be improved to keep ‘Space for Peace Aotearoa’. This requires an amendment to prohibit rocket launches of military weapons and satellites contributing to warfare infrastructure. In addition, the NZ government should actively pursue the UN PAROS Treaty (Prevention of an Arms Race in Outer Space) for protection of Heaven and Earth for humanity.”

You probably didn’t see anything in the mainstream news about the Equinox day of protest held in March 2021 at SpaceX headquarters in Hawthorne, CA and elsewhere, either.

“Join us and people around the world as we demand an immediate halt to 5G satellites & technology on earth & in space unless proven safe… as we call for safer and wiser technology options. Up to 100,000 low earth orbit satellites, complementary earth base stations & millions more cell antennas (aka User Terminals) have been approved by the FCC. SpaceX and other companies are now deploying satellites to provide 5G wireless internet to every corner of the globe, blanketing the entire planet in wireless radiation with potentially devastating consequences to all of life.”

1981-1983 Greenham Commons Protests, Have You Read the History about the U.S. Using Electronic Weapons on Women Protestors? (No, You Probably  Haven’t)

As chronicled by the Imperial War Museum,

“In 1981 a group of women, angered by the decision to site cruise missiles (guided nuclear missiles) in the UK, organised a protest march from Cardiff, Wales to Greenham Common Air Base near Newbury in Berkshire. Here they set up what became known as the Greenham Common Women’s Peace Camp.

Between 1981 and 1983 the protesters attempted to disrupt construction work at the base. Their methods included blockading the base and cutting down parts of the fence. In December 1982 more than 30,000 women gathered at Greenham to join hands around the base at the ‘Embrace the Base’ event.”