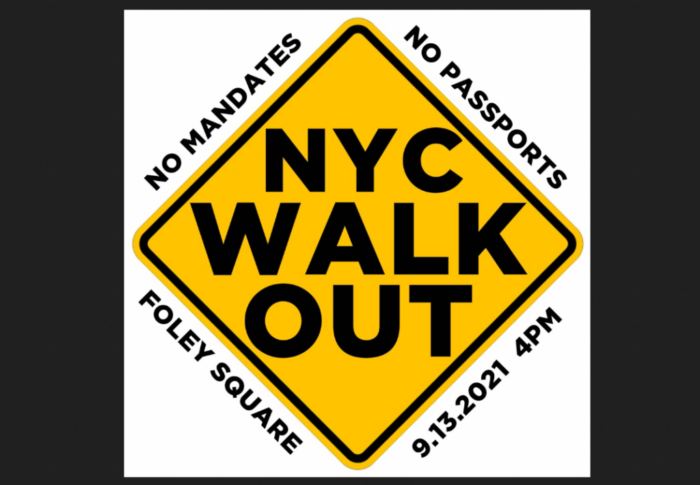 Watch Michael Kane of Teachers For Choice promote August 25 protest in NYC. Kane explained that the protests are not “anti-vaxx”. They are pro choice. That’s why many people who got the shots support the rallies. If you have never been to a rally/protest, the organizers say this is the one to come to – today, September 13th beginning at 4 pm EST! There were 3,000 people at the August 25 rally and they expect 100 times that now. They hope everyone from New York and surrounding states shows up so this looks like the huge rallies in Europe!

Find Out WHY The COVID Injection is a Complete Failure

Del Bigtree, host of the weekly fact-based news series The HighWire, spoke at the TEACHERS FOR CHOICE protest at Foley Square in NYC on 9-13. Bigtree was an Emmy Award winning producer of “The Doctors” TV show and produced the 2016 documentary Vaxxed: From Coverup To Catastrophe that went viral! The Highwire is seen in 35 nations and has an audience of millions. Bigtree has been fighting for our rights to medical freedom before most of us knew we needed to fight for those rights. He is an amazingly dynamic speaker and strong advocate of free speech and open debate.

THE HIGHWIRE’S DEL BIGTREE ON CENSORSHIP AND THE COMING MANDATORY VACCINATION PROGRAM!!!

Bigtree interviewed Michael Kane (Video) on September 9 about his August 25 and September 13 protests. “Thousands of NY teachers are organizing and taking to the streets against their union’s #Covid19 vaccine mandates. Del talks to the founder of “Teachers For Choice,” Michael Kane, about the success of their last rally, and the plans for their upcoming “walk out” on Sept 13th.”

Doctor Aaron Lewis shares why he believes Connecticut’s Governor Ned Lamont is launching an attack on black Americans by testing a COVID-19 vaccine on them.

In 2020, people around the world took to their balconies and front porches to celebrate the courageous frontline healthcare workers saving lives during the “pandemic”. Now, those same heroes are being targeted by the government if they choose natural immunity over taking a rushed, poorly-tested COVID injection that the CDC now admits requires “booster shots” every five months.  The Frontline Heroes asserted their Freedom To Choose by filing a lawsuit.

“A hospital in upstate New York has been forced to ‘pause’ the delivery of babies starting Sept. 24 after a flood of maternity workers resigned over Covid-19 vaccine mandates. Lewis County Health System CEO Gerald Cayer made the announcement in a Friday press conference, according to WWNY. According to Cayer, six employees in the maternity unit resigned and another seven are ‘undecided,’ rendering the hospital unable to safely deliver children…..

New York isn’t the only state with healthcare workers who refuse to get vaxxed. Last month, a group of New Mexico healthcare workers protested vaccine mandates – which they say ‘take away people’s choice and informed consent,’ and ‘violate medical codes of ethics as well as fundamental human rights, the constitution, and the Nuremberg Code,’ according to KFOX14. Protests have also been held in California, Colorado, Wisconsin, Arizona, Washington and elsewhere.”

Menticide: Killing The Mind To Drive A Nation Insane

THE MASS PSYCHOSIS OF THE COVAIDS CULT (Video) Four Stages of Marxist Takeover: The Accuracy of Yuri Bezmenov “The journalist and Soviet defector long ago pegged the current left-wing moment.”

Bezmenov explains that the US would be taken down in the following four stages. The COVID “new normal” is the fourth stage of normalization of policies that destroy the nation. Dr. Vladimir Zelenko has been nominated for the Nobel Prize in Medicine for The Zelenko Protocol which has saved millions of COVID patients around the world.

A Doctor’s Grave Warning For Israel “Prolonged fear and anxiety, coupled together with human isolation, psychologically decompensates the individual that they have a breakdown and are not capable anymore of rational thought. There’s a global psychosis going on. People will gravitate towards any false promise that will reduce the emotional pain that they’re in because of the fear. So, you can dangle a false vaccine in front of them and they’ll believe it just because they don’t want to feel the pain anymore. You challenge that narrative, they become belligerent because what you’re really doing is bringing them back into that emotional pain state that they don’t want to be in. They’ve lost their minds, literally.”

“We could have prevented 84% of the deaths.”

Dr. Richard Fleming’s book Is COVID-19 a Bioweapon? A Scientific and Forensic Investigation documents evidence showing SARS-CoV-2 is a bioweapon created over the past two decades. Since the COVID shots are genetic reproduction of that bioweapon, they are bioweapons too. Dr. Fleming’s site has documents for medical, religious, legal and Constitutional exemptions to vaccination.

“In 2020, Dr. Richard M. Fleming began investigating SARS-CoV-2/COVID-19….What he discovered will shock you… By 1999, US Federal Agencies began funding Gain-of-Function research. Research that is designed to increase the ability of pathogens to infect and harm people. In 2019, one of those pathogens was intentionally released in the Wuhan Wet Market.

The key to understanding this bioweapon is its spike protein. The same spike protein now being made in millions of people after the COVID vaccines are injected into them. These vaccines are the genetic code of this bioweapon. This book traces the money trail of COVID-19; showing who is ultimately criminally responsible for this weapon which violates the Biological Weapons Convention (BWC) Treaty, exposing those who have committed crimes against humanity. Dr. Fleming will reveal the ultimate conspiracy: one that puts the future of the entire world at stake.”