Candy Carcinogens Found in Children’s Candy and Other Food Products 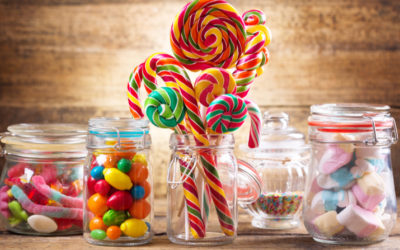 If given the choice, how many parents would put petrochemicals in their children’s food? But when you buy most children’s foods on grocery store shelves, that’s the decision you’re making. These products are filled with petrochemical-derived ingredients from artificial colors to preservatives. Alarmingly, these ingredients have also been linked with health problems from hyperactivity to cancer.

On food labels, watch out for anything labeled a “dye” — a synthetic, petroleum-based coloring chemical, or a “lake” — the same color, but reformulated to be water-insoluble for use in dry or fatty foods. According to Center for Science in the Public Interest, the best policy is to avoid all foods made with artificial colors, not just because of the potential for health risks, but because artificially colored foods are typically low in nutritional value.

The most dangerous colors to watch out for are:

Other dyes include blue 2, which has been linked to brain cancer in rats, green 3, previously linked to bladder and testes tumors in rats, and red 3, linked to thyroid tumors in rats. Although these dyes are rare, they can still be found in some children’s foods, such as Fruit Roll-Ups.

While the evidence linking some of these dyes to cancer is limited, the evidence linking them to hyperactivity grows stronger every year. Since the FDA last reviewed the issue in 2011, at least eight new studies, including two meta-analyses, have indicated that removing artificial colors from hyperactive children’s diets leads to significant behavioral improvements.

Colors aren’t the only toxic additives hiding out in children’s foods. Foods targeted at children regularly contain petrochemical-based preservatives such as TBHQ, BHA and BHT. TBHQ has been linked with increased tumor risk in rats, while studies have shown BHA and BHT to increase risk of various cancers. In fact, the U.S. Department of Health and Human Services says BHA is “reasonably anticipated to be a human carcinogen.” This ruling has had no effect on the FDA.