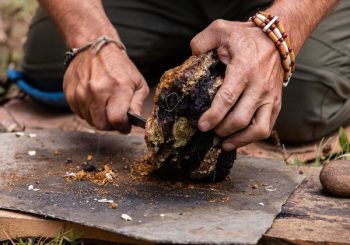 We love mushrooms in my house.

My wife and I often use chaga as a natural afternoon pick-me-up in the form of tea (yes, mushroom tea), as well as a seasonal remedy for boosting our immune systems. It truly works wonders at fending off straggling germs during flu season.

Haven’t heard of chaga before? It’s one of the most powerful and mysterious natural remedies in the Western world.

Chaga has been used for centuries by shamanic healers and various cultures throughout Asia, Russia, and other Northern European countries. And for good reason… It’s loaded with antioxidants and healing properties.

The chaga mushroom grows on birch trees throughout the northern hemisphere and is often mistaken for burnt wood due to its dark crusty appearance.

Known scientifically as Inonotus obliquus, chaga is one of the most powerful medicinal mushrooms yet discovered. So much so, it’s been deemed as the “King of the Medicinal Mushrooms”. And in some areas, it’s even been called the “gift from God.” Those are some pretty big titles to live up to, but this fungus is more than deserving.

Chaga contains one of the highest levels of antioxidants. This alone makes it a powerhouse healer. Antioxidants are vital for fighting off free radicals – the very things that attack our healthy cells and make us sick.

Thanks to its high antioxidant concentration, chaga has shown to be beneficial in fighting many different diseases, including certain cancers, diabetes, and even heart disease.

This is primarily because of its ability to build up and boost the immune system — and a healthy immune system is vital for overcoming any type of illness.

Chaga is referred to as an immunomodulator, meaning it adapts to the needs of the immune system, similar to an adaptogenic herb. It’s able to do this because of its rich abundance of beta-d-glucans – a type of polysaccharide found in a variety of fungi. These compounds help balance the immune system by calming an overactive system or stimulating a slow one.

When you’re sick, or on the verge, your white blood cells take a beating. Hence, the lethargic feeling you experience. These cells are your body’s first line of defense when trying to ward off infections, whether viral or bacterial.

Chaga works by stimulating the activity of your white blood cells, giving them the strength they need to target viruses and other infections.

And when you add chaga’s anti-bacterial, anti-viral, and anti-inflammatory properties to the mix, your immune system has the great protective barrier it desperately needs today!

Chaga is harvested and then either dried or ground into a powder for consumption. It can be made into a tea, extract, or tincture, and can also be taken as a dietary supplement in the form of a capsule.

Brewing chaga tea or adding chaga powder into beverages are quick and easy ways to reap its many healing benefits. And because it has a bitter and earthy taste, it can make a great substitute for coffee.

Here’s a recipe for one of my favorite ways to get my daily dose of chaga. It gives you the boost of energy and vitality you need first thing in the morning or late in the afternoon when you’re feeling a bit drained.

(*If you’re using chaga mushroom chunks, brew chaga tea per the brand’s instructions in place of powder and hot water.)

You can easily find varieties of chaga online at Mountain Rose Herbs, Vitacost, or any other reputable supplement company. Check your local health food store as well, as most carry some form of chaga.

With the wide range of chaga supplements, it’s easy to add this mushroom into your diet.

Give it a shot!