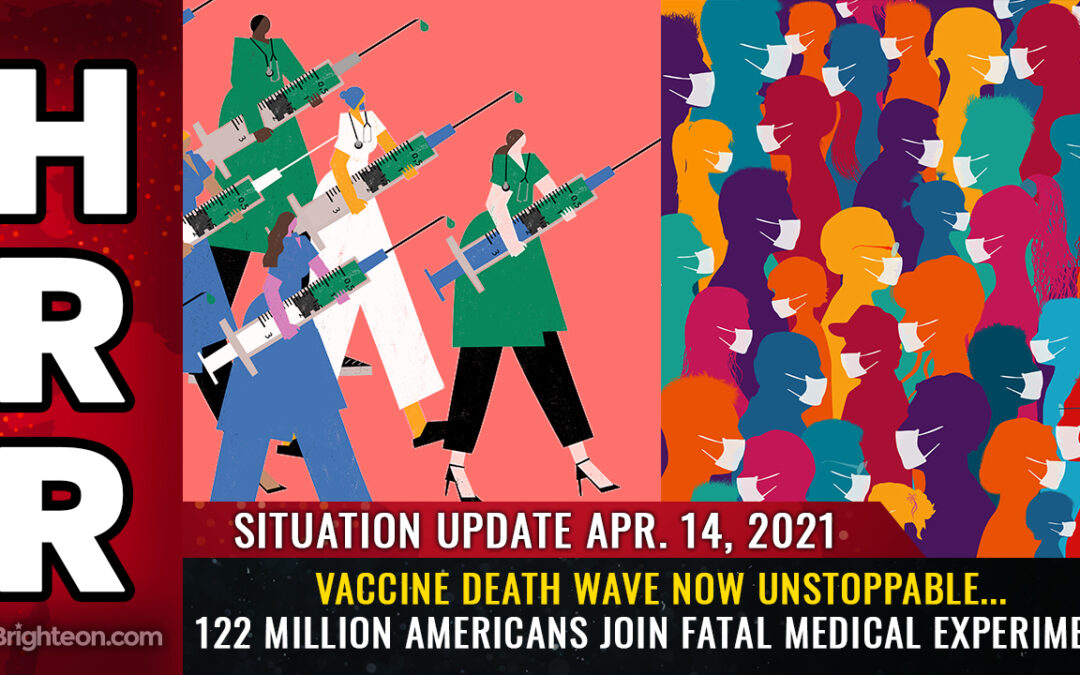 According to the CDC Covid Data Tracker page, over 122 million Americans have already received at least one dose of a covid vaccine. That’s about 37% of the population, and it’s increasing by nearly 2 million people per day in the United States.

Notably, as Americans are being killed by vaccines, globalists are replacing the American electorate by bringing in massive waves of illegal aliens, many of whom are pregnant women ready to give birth to anchor babies. The criminal Marxists who stole the 2020 election are continuing their plan to mass murder real Americans (with vaccines and bioweapons) and replace them with compliant, low-skilled illegals who will vote for socialist handouts and freedom-killing Democrat policies.

Both Johnson & Johnson and AstraZeneca vaccines are causing deaths via blood clots, obviously because the spike protein antibody causes blood clots that travel to the heart, lungs and brain, killing patients from the clots. Yesterday, the FDA ordered a nationwide halt to the J&J vaccine because so many people were dying. But even the mRNA vaccines also create spike proteins that are coagulants, contributing to the blood clots that can be fatal.

What’s shockingly obvious at this point is that an insane vaccine experiment has been unleashed in America, and there’s no way to undo it. Now, over 122 million Americans will be subject to the risk of blood clots, medium-term inflammation effects and hyperinflammatory reactions to future pathogens that are likely to appear this coming Fall and Winter. No one knows for sure how many will die, but it looks rather likely that the vaccine may end up killing far more people than the coronavirus pathogen.

Almost no one who took the vaccine has any clue that the vaccines were never subjected to traditional large-scale, long-term clinical trials. They are utterly unaware that the FDA only allowed the vaccines under “emergency authorization” use, which by definition means the vaccines are medical experiments. The term “oblivious” barely begins to describe the shocking lack of knowledge under which vaccine recipients suffer, even as they tell themselves they are “smart” or “healthy” for participating in Big Pharma’s global depopulation and infertility experiment.

Importantly, once a person’s immune system is compromised with these vaccine injections, there’s no way to undo the damage. Those vaccine victims are now damaged for life, and even if they later learn the truth about the vaccine depopulation agenda, there’s no treatment, supplement or technology in existence that can restore their body to a pre-vaccination status. They have unwittingly signed their own death warrants, all while gleefully thinking they’re going to win their freedom with tyrannical vaccine passports.

How many millions will die from the covid vaccine over the next 2-3 years? What will happen to society when then death wave kicks in?

In today’s Situation Update podcast, I ask the important question of how many millions will die from the vaccine in the next few years. We must also consider how many people will become infertile (both men and women, and no, there isn’t any other gender).

The globalists built the covid bioweapon and released it upon the world precisely to push for mandatory vaccines that are deliberately designed to achieve global depopulation. And it seems there are likely 150 – 200 million Americans who are dumb enough to volunteer to be human guinea pigs in a deadly depopulation medical experiment that’s specifically designed to eliminate people who are stupid enough to participate in it.