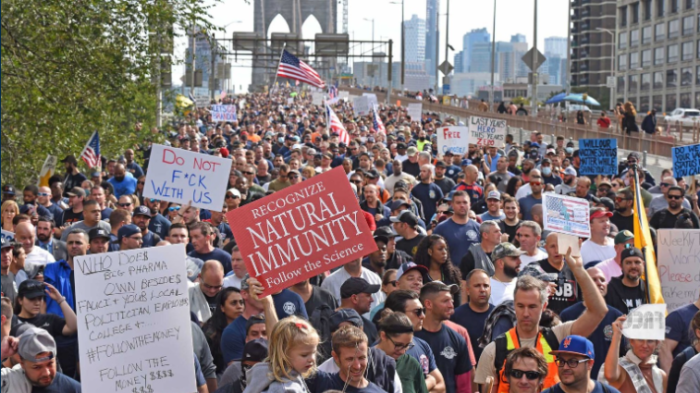 In 2020, New Yorkers cheered the heroic work of healthcare workers and First Responders who dealt with the COVID crisis. In 2021, New York is firing hundreds of thousands of healthcare workers, First Responders, and teachers if they refuse to get the very controversial COVID “vaccines”. NYC Mayor Bill deBlasio and NY Gov. Kathy Hochul believe yesterday’s heroes should be discarded — robbing New Yorkers of their essential services. What is really driving this insane assault?

“Thousands of good cops and city municipal workers stand to lose their jobs,” said a police officer. “Are the good people of New York City confident adequate people will fill those positions. I’m frightened of what comes next?” About 5,000 demonstrators crossed the Brooklyn Bridge from Brooklyn into Manhattan.”

The article says 5,000 attended the rally. However, anecdotal reports say as many as 12,000 — and possibly as many as 20,000 — attended. Crowd estimates are notoriously difficult.

First responders are just the latest to come under attack in New York. In September, restaurants were required to refuse service to “unvaccinated” people. Then, teachers and healthcare workers who refused to get the “vaccine” were fired. Gov. Kathy Hochul says she plans to replace the healthcare workers with the National Guard or foreign healthcare workers. Mayor Bill deBlasio claims there are lots of substitutes available to replace fired teachers.

“Mayor Bill de Blasio‘s COVID-19 vaccine mandate is generating major pushback from public employee unions. They are vowing legal action and predicting dangerous staffing shortages that could impact the safety of city residents. Most of the union leaders CBS2’s Marcia Kramer spoke to on Wednesday said they have members who simply don’t want to put the vaccine in their bodies. That includes cops, firefighters, sanitation workers, and emergency medical personnel. A shortage in each of those agencies would be felt by city residents.

And if de Blasio can’t find some way to get them to go along, agencies could be faced with a dramatic drop in city services. “Thousands will walk off from EMS. Thousands of others will walk from fire. Thousands of police officers will walk off,” said Oren Barzilary, president of Local 2507, which represents EMTs and paramedics.

Barzilay said he has met with dozens of angry emergency medical workers, who, for a variety of reasons, are ready to leave their jobs rather than comply with the mayor’s vaccine mandate. And while worker shortages can affect public safety, Barzilay said a shortage of ambulances can lead to more serious consequences. “People will die. When it comes to EMS, minutes count. When you have a life-and-death situation, where you stop breathing, and you don’t get an ambulance, there within four to six minutes, clinical death begins. There’s no time to play here with people’s lives,” Barzilay said.”

“Only 50% of EMS workers are currently vaccinated. Additionally, 60% firefighters, 71% of cops, 60% of sanitation workers, and 51% of correction officers are vaccinated, officials said. “I think certain city services are going to be affected. I really do, no matter what agency you’re talking about,” said Harry Nespoli, president of the sanitation union and head of the Municipal Labor Council.

Nespoli said the city’s unions intend to sue. They want the mayor to offer religious exemptions, a weekly testing option, and, in some cases, recognition of a theory that workers who have had COVID have immunity to the disease. He also said that if thousands of city workers balk at taking the shot, the city could be faced with hundreds of millions, if not billions, of dollars in overtime.”

“De Blasio, who is reportedly eyeing a run for higher office, is okay with shelling out more money, even though it could saddle his successor with the bill. “Obviously, we’ll use overtime when we need to use overtime. We’ll do redeployments when we need to do redeployments. We have a variety of ways we can adjust the use of the workforce. We feel confident that even if there is some temporary dynamic of some people not being ready right away, we’re going to find our way through it,” de Blasio said.

Still, there are a lot of people who say they won’t get the shot. James Daly, a retired FDNY three-star chief, said his three sons who work for the department are among them. “I’m here to fight for their right to choose,” Daly said. “They were the heroes of this city and now they’re being demonized by this mayor, who’s looking to take away their paycheck.” “I would be dishonoring God if I did take this vaccine,” EMS worker Sally Moran added.

De Blasio’s successor will have to deal with staff shortages and new overtime costs. Democratic mayoral nominee Eric Adams says it’s essential to get city workers vaccinated, but adds the city needs to work with the unions to make sure there’s a buy-in. Republican Curtis Sliwa is against forcing city workers to choose between a shot and a job. He says they should be offered a testing option.”

Dr. Anthony Fauci, Director of the National Institute of Allergy and Infectious Disease at the National Institutes of Health, published Covid-19 – Navigating the Uncharted on March 26 in the New England Journal of Medicine which said “the overall clinical consequences of Covid-19 may ultimately be more akin to those of a severe seasonal influenza (which has a fatality rate of approximately 0.1)…rather than a disease similar to SARS or MERS, which have had case fatality rates of 9 to 10% and 36%, respectively”.

CDC statistics show COVID is not a “deadly pandemic”. In addition, getting shots now will not end these mandates as the CDC now says booster shots are necessary — possibly every few months.

NYC War On Unvaxxed Is Causing Chaos shows that the NYC “vaccine” mandate and “vaccine” passport have already caused chaos for restaurants, teachers, and healthcare workers. Teachers For Choice has held several massive rallies protesting the  mandates and has taken the case through the courts. Some NYC Restaurants Refuse to Discriminate Against Unvaxxed. A NYC restaurant manager goes renegade in the face of new vaccination-proof rules  reports:

“Not all Big Apple restaurants were happy as a citywide vaccine mandate took effect on Monday — and some are all but thumbing their noses at the controversial clampdown.” “This Is Not Political!” — Thousands Gather At “Freedom Rally” In New York City To Oppose Vaccine Passport  “Thousands gathered near Central Park in Manhattan on Saturday to express their discontent with the vaccine mandates and passport requirements implemented on the city by Mayor Bill de Blasio this month.“

Del Bigtree, host of the weekly fact-based news series The HighWire was the keynote speaker at the TEACHERS FOR CHOICE protest on September 13.

Bigtree was an Emmy Award winning producer of “The Doctors” TV show and produced the 2016 documentary Vaxxed: From Coverup To Catastrophe that went viral! The HighWire is seen in 35 nations and has an audience of millions. Bigtree has been fighting for our rights to medical freedom before most of us knew we needed to fight for those rights. He is an amazingly dynamic speaker and strong advocate of our constitutional rights including free speech and open debate.

The Real Anthony Fauci: Bill Gates, Big Pharma, and the Global War on Democracy and Public Health is a best-seller. The Amazon description says:

“Pharma-funded mainstream media has convinced millions of Americans that Dr. Anthony Fauci is a hero. He is anything but. As director of the National Institute of Allergy and Infectious Diseases (NIAID), Dr. Anthony Fauci dispenses $6.1 billion in annual taxpayer-provided funding for scientific research, allowing him to dictate the subject, content, and outcome of scientific health research across the globe. Fauci uses the financial clout at his disposal to wield extraordinary influence over hospitals, universities, journals, and thousands of influential doctors and scientists—whose careers and institutions he has the power to ruin, advance, or reward.

Robert F. Kennedy Jr. unearthed a shocking story that obliterates media spin on Dr. Fauci . . . and that will alarm every American—Democrat or Republican—who cares about democracy, our Constitution, and the future of our children’s health.

The Real Anthony Fauci reveals how “America’s Doctor” launched his career during the early AIDS crisis by partnering with pharmaceutical companies to sabotage safe and effective off-patent therapeutic treatments for AIDS. Fauci orchestrated fraudulent studies, and then pressured US Food and Drug Administration (FDA) regulators into approving a deadly chemotherapy treatment he had good reason to know was worthless against AIDS. Fauci repeatedly violated federal laws to allow his Pharma partners to use impoverished and dark-skinned children as lab rats in deadly experiments with toxic AIDS and cancer chemotherapies.

In early 2000, Fauci shook hands with Bill Gates in the library of Gates’ $147 million Seattle mansion, cementing a partnership that would aim to control an increasingly profitable $60 billion global vaccine enterprise with unlimited growth potential. Through funding leverage and carefully cultivated personal relationships with heads of state and leading media and social media institutions, the Pharma-Fauci-Gates alliance exercises dominion over global health policy. The Real Anthony Fauci details how Fauci, Gates, and their cohorts use their control of media outlets, scientific journals, key government and quasi-governmental agencies, global intelligence agencies, and influential scientists and physicians to flood the public with fearful propaganda about COVID-19 virulence and pathogenesis, and to muzzle debate and ruthlessly censor dissent.”

See The Global Landscape on Vaccine ID Passports and Where It’s Headed: Part 1. In 2020, many Californians and New Yorkers fled to states that respect their rights.

Also see my article from yesterday: Israeli Documentary Exposes Mayhem of Pfizer Shots which offers additional research and videos about documented vaccine dangers and why natural immunity is vastly superior to COVID shots.