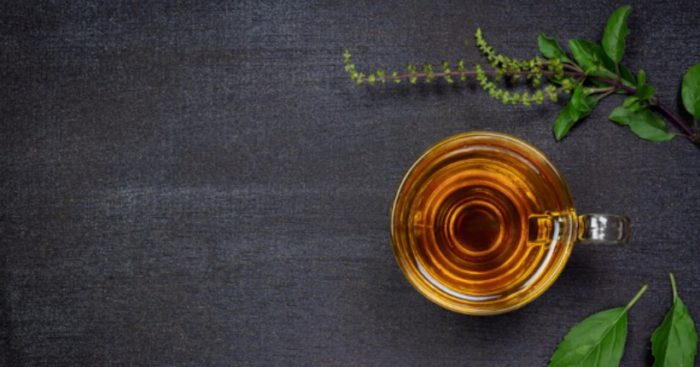 From fighting bad breath or gum disease without the use of chemical mouthwash to pushing glucose levels down, holy basil — also known as tulsi — can be your powerful tool for great health.

Holy basil, also known as tulsi, is an aromatic herb that is widely celebrated in India within Ayurvedic medicine. According to the ancient wellness system, it’s an “elixir of life” for its many flexible health uses and benefits. In the modern world, holy basil is an “herb for all reasons” for its ability to address physical, chemical, metabolic and psychological stress via a range of pharmacological actions.[i]

Part of the Lamiaceae family, Ocimum sanctum is believed to originate in north central India and today grows in the eastern tropics. It is a known potent adaptogen, believed to help with adaptation to stress and promote homeostasis in the body. Here are three powerful reasons to try holy basil and make it part of your wellness arsenal.

Chlorhexidine is an antimicrobial agent that remains the conventional standard for addressing bacteria present in the mouth. It is also often prescribed as an antimicrobial oral wash for the beginnings of gum disease, helping to prevent gingivitis.

This drug, however, is not without side effects, such as greater likelihood of teeth staining and altered taste sensation with prolonged use.[ii] There’s also growing recognition that using harsh antimicrobials in your mouth negatively alters your oral microbiome.[iii]

All subjects were treated with scaling and asked to rinse with their assigned mouthwash twice daily for a month. Results indicated that holy basil was as effective as chlorhexidine in reducing plaque, gingivitis and bleeding at 30-day intervals. Like aloe vera’s, its benefit may stand for the long term.

In a study published in the Journal of Clinical and Experimental Dentistry, 30 individuals used holy basil mouthwash, chlorhexidine mouthwash or a sterile water rinse twice every day for four days.[v] Holy basil acted effectively against P. intermedia and F. nucleatum, two pathogens known to cause gum infection. It also demonstrated an antiplaque effect, with no significant difference from chlorhexidine’s action.

In tackling the potential causes of bad breath and related oral health woes, there is a wealth of natural options that are worth exploring besides commercial, chemical-based mouthwash products.

The current and emerging science on holy basil as a potent adaptogen reinforces Ayurvedic wisdom, which suggests that the herb is an effective tonic for the body, mind and spirit.[vi] One of its benefits is helping reduce stress and anxiety, a problem afflicting millions worldwide.

In a study, fresh leaves of holy basil were tested for antistress activity against experimentally induced oxidative stress in animal models.[vii] The subjects received 2 grams (g) of fresh leaves each for 30 days.

According to the results, holy basil had potential antistress action that can be partially attributed to its antioxidant properties. This antioxidant effect was found in other studies to back many of its pharmacological actions, with phenolic compounds including eugenol, circilineol, isothymusin, isothymonin, rosmarinic acid and zinc, an antioxidant mineral.[viii]

A separate study concluded that holy basil was effective in managing the effects of stress by inhibiting the release of cortisol and other stress-inducing processes in the body.[ix]

These psychotherapeutic properties of holy basil were deemed comparable to diazepam as well as antidepressant drugs.[x] Animal studies further revealed memory and cognitive enhancement, alongside memory protection during aging.

Virtually all parts of the plant can help reduce blood sugar, particularly in those who have prediabetes or Type 2 diabetes.[xi],[xii] Holy basil may also be effective against weight gain, hyperinsulinemia, insulin resistance and high cholesterol.

Findings of a 2020 study showed that the active crude extract of holy basil leaves and its active fractions, namely ethyl acetate/butanol, could provide significant glucose-lowering effects because of the presence of polyphenols.[xiii] “In conclusion, isolation of the active components … may pave the way to the development of new agents for the treatment of diabetes and its complications,” the researchers wrote.

To use holy basil and incorporate it into your daily regimen, keep some tea bags handy especially during travels. You may consume it every four to six hours while on the move, preferably starting and ending the day with it.

Organic tulsi capsules are also available: 1 g a day as a preventative or 2 g a day if already feeling unwell, or as directed by your doctor. Learn more about this medicinal food via the holy basil scientific research available on the GreenMedInfo.com database.