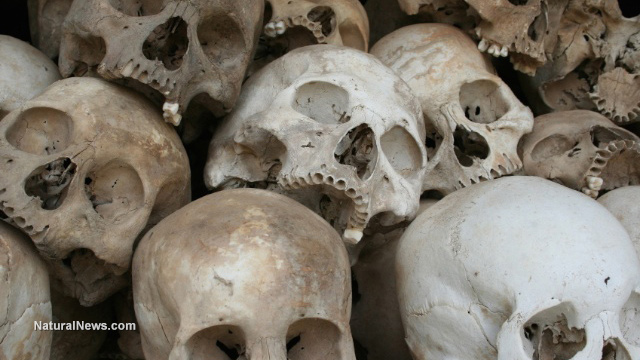 Saving the planet from climate change sounds like a virtuous platform, one where people can come together to stop pollution and hold big industry accountable. However, the climate change narrative is currently run by a GLOBALIST DEATH CULT that has declared war on the most essential elements of life.

Anyone who dissents to the climate change narrative is labeled a “climate change denier.” This ad hominem is used as a manipulation tactic to get more people to blindly go along with whatever the god-complex globalists want.

The war on carbon and carbon dioxide is diabolical

The first element under attack is carbon dioxide. The United Nations has declared CO2 to be a pollutant, a greenhouse gas that contributes to warmer temperatures around the globe. The UN climate change experts believe they can predict the future temperatures, control the Earth’s thermostat and dictate temperatures around the globe. In order to accomplish their goals, they seek to control industry, energy, farming and food production of sovereign nations.

CO2 accounts for approximately 78% of human’s contribution to the greenhouse effect, mainly through fossil fuels and the production of iron, steel, cement and petrochemicals. Governments are investing in carbon sequestration to take carbon dioxide from the atmosphere and pump it into the ground.

Ironically, carbon dioxide is the very thing that humans also exhale every moment of their lives. CO2 is critical for plant life, for it is used in the process of photosynthesis to stimulate plant growth and return oxygen back to the atmosphere so people can breathe.

Carbon itself is the building block of all life. Every living thing on planet Earth is made of carbon. There is carbon in human skin, organs and blood. All plant matter consists of carbon atoms. So, when government officials propose carbon taxes to fight climate change, they are directly threatening all life on Earth and implying that depopulation and plant scarcity is the answer for controlling planetary temperatures.

The war on carbon has expanded to a war on oxygen, nitrogen, and the sun

Carbon dioxide isn’t the only element under attack. If CO2 is a pollutant, then so is oxygen, because it’s the dominant atom of CO2. Moreover, by curbing carbon dioxide levels and limiting plant growth, globalists are essentially trying to limit the exchange of oxygen for people and animals to breathe.

That’s not all. Globalists are now targeting the nitrogen that plants need in order to grow. Nitrogen fertilizers, which are responsible for over half of the world’s food supply, are now being restricted. Farmers are protesting worldwide, as the United Nations enforces the Paris Climate Agreement. For example, the Dutch government has already submitted their plan to cut nitrogen by 70 percent in 131 areas. The war on nitrogen is a war on agriculture and it will cause famines of great magnitude.

These climate controls also target livestock and sunshine. For example, the Dutch government estimates they will have to shut down 11,200 farms and kill livestock owned by 17,600 farmers by 2030 to satisfy the Paris Climate Agreement. Sunlight is also being targeted. Governments are investing in sun-dimming geoengineering projects that inject metals into the atmosphere to reflect sunlight away from the surface of the Earth.

These globalists are interested in destroying life on planet Earth, while convincing populations that it’s all being done for the betterment of the planet and the future of mankind. This is about as psychopathic as it can get. In their quest to be God of the universe, these globalists are dismantling the energy and food supply of sovereign nations, driving populations into destitution.

Check out the documentary: The Globalist War on the Elements of Life.