Early Risers Who Stay Active Throughout The Day Are Happier, Mentally Stronger 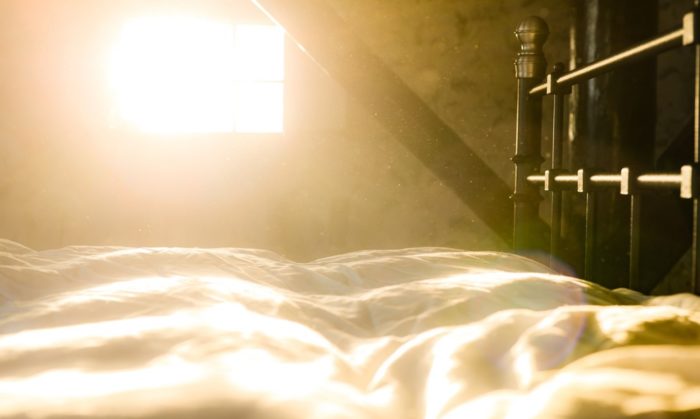 Night owls take note! Early risers who remain active throughout the day tend to be more content and sharper mentally, especially in older age. Scientists at the University of Pittsburgh report that seniors who get up early and stay busy all day long are both happier and perform better on cognitive tests in comparison to those with more irregular daily activity patterns.

The importance of staying busy, especially as one grows older, is well documented. This new research, however, suggests patterns of activity, not just activity intensity, are vital to both healthy aging and mental health.

“There’s something about getting going early, staying active all day and following the same routine each day that seems to be protecting older adults,” says lead study author Stephen Smagula, Ph.D., assistant professor of psychiatry and epidemiology at Pitt, in a statement. “What’s exciting about these findings is that activity patterns are under voluntary control, which means that making intentional changes to one’s daily routine could improve health and wellness.”

To research daily activity patterns among older Americans, and potentially identify subsequent connections to mental health and cognition, study authors recruited 1,800 senior citizens (ages 65+). All participants wore accelerometers, or movement-tracking devices similar to a Fitbit or smart watch, around their wrists for a full week. Additionally, subjects filled out a series of questionnaires assessing depressive symptoms and cognitive function.

In all, 37.6 percent of participants rose early in the morning, stayed active throughout the day, and generally had consistent daily routines.

“Many older adults had robust patterns: They get up before 7 a.m. on average, and they keep going; they stay active for 15 hours or so each day. They also tend to follow the same pattern day in, day out,” Prof. Smagula explains. “Lo and behold, those same adults were happier, less depressed and had better cognitive function than other participants.”

Staying active longer, regardless of intensity, key to sharper mind?

Another 32.6 percent of included older adults also had consistent daily patterns, but were active for an average of just 13.4 hours each day because they woke up later in the morning or started unwinding earlier in the evening. These subjects reported more depressive symptoms and scored lower on cognitive tests than early risers.

“People often think about activity intensity being important for health, but it might be the duration of activity that matters more,” Smagula adds. “This is a different way of thinking about activity: You may not need to be sprinting or running a marathon but simply staying engaged with activities throughout the day.”

The remaining 29.8 percent of participants displayed disrupted activity patterns; activities were erratic and inconsistent across days. This group had the highest rates of both depression and low cognitive test scores. Smagula theorizes the relationship between mental health and activity patterns likely goes both ways. In other words, depression or cognitive problems often make it harder to stick with a set schedule. Conversely, a disorderly routine can also worsen these symptoms.

“Our findings suggest that activity pattern disruption is very common and associated with health problems in older adults,” Smagula comments. “The relationship is likely bi-directional, so the good news is we think that simple changes — things everyone can try — can restore regular activity patterns and doing so may improve health.”

‘Be reasonable with yourself’ in order to meet your goals

Moving forward, study authors are working on the development of new interventions to test their hypothesis that a more consistent daily routine leads to improved cognition and mental health in older adults. If you’re looking to make a change in your own routine, Prof. Smagula says the first step is usually to wake up at the same time each day – regardless of how tired you may feel.

“The other thing is having a realistic plan to keep active through the whole day. This can be really hard — especially if you’re in a slump or recovering from an injury — so it’s important to be reasonable with yourself,” he adds. “A plan could include making a list of activities you enjoy and scheduling time to meet a friend or neighbor.”

Time cues, or “zeitgebers,” help set the body’s internal clock. Examples of include sunlight, exercise, and eating. Another common example is pets, because they need meals and walks at the same time each day.

“Most people are aware of the importance of good sleep and exercise, but I think what’s missing from this picture is the daily, or circadian, pattern of activity,” Prof. Smagula concludes. “Having something to wake up for each morning and having a full day that you find purposeful and rewarding might be what’s important for us sleeping well at night and aging well.”

The study is published in JAMA Psychiatry.