Acupuncture And EHS/Microwave Illnesses; Taking Another Look At Electrical Pollution 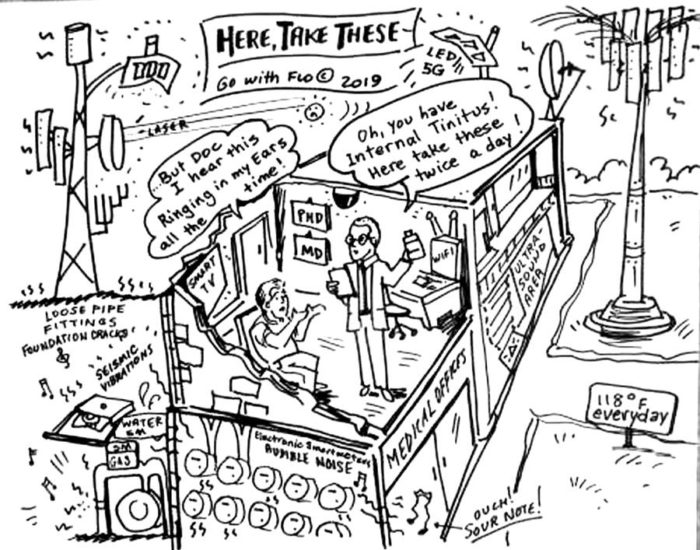 Although consumers are mostly unaware, researchers and laypersons worldwide have been studying the phenomenon of symptom onset, illness, and disability associated with exposure to radar, microwaves, non-ionizing radiation, and other artificial, manmade frequencies, for decades.

A wave of so-called “electromagnetic hypersensitivity” complaints emerged when utilities began installing wireless meters and powerline communications onto the electric grid. Reports of harm also have accompanied the installation of towers and antennas, including 5G, in residential areas.

Rather than heeding evidence of damage, the industry and regulators have continued to pursue expansion and growth, devoid of premarket safety testing, monitoring or independent investigation.

On the other side of the equation, thousands of years ago, Eastern masters developed practices to harmonize themselves with the rhythms within the Cosmic Current, which they recognized as a synchronizing force in the universe.

Is it time to consult the ancient wisdom, along with a growing body of expertise sourced from around the world?

In March of 2015, French physician Dr. Dominique Belpomme summarized biological markers that have been associated with EHS/microwave illness.

Earlier, in a radio interview in 2014, Dr. Belpomme surmised that “Electrosensitivy is a Pre-Alzeheimer’s state”.  “From the graph [ ] depicting Alzheimer’s prevalence over time, we can see that the first uptick appears to have been in the period 1920-1980. This was the period when radio, radar, television, computers and other electronics were introduced. The second uptick, and a very significant one, appears to have occurred from 1980 to the present day, the period when cell phones, WiFi, WiMax, RFID, smart meters, wireless home computers and printers, iPads and a wide range of wireless RF monitoring devices and sensors, became commonplace in our lives. More research is needed as well as public education about the EHS-Pre-Alzheimer’s connection.”

An overview of his work is available here, including the recent paper, “Why electrohypersensitivity and related symptoms are caused by non-ionizing man-made electromagnetic fields: An overview and medical assessment” by Dr. Belpomme and Philippe Irigaray.

Recent epidemiology work by UK researchers Colin Pritchard and Emily Rosenorn-Lanng of Bournemouth University indicates that rates of neurological disease and death are in fact sky-rocketing, especially for older women, and that diagnoses are being made for patients in younger age groups.  See here and here.

One area of concern to Western researchers is damage to the blood brain barrier.

The Bio-initiative Report notes, “The BBB is a protective barrier that prevents the flow of toxins into sensitive brain tissue. Increased permeability of the BBB caused by cell phone RFR may result in neuronal damage. Many research studies show that very low intensity exposures to RFR can affect the blood-brain barrier (BBB) (mostly animal studies). Summing up the research, it is more probable than unlikely that non-thermal EMF from cell phones and base stations do have effects upon biology. A single 2-hr exposure to cell phone radiation can result in increased leakage of the BBB, and 50 days after exposure, neuronal damage can be seen, and at the later time point also albumin leakage is demonstrated. The levels of RFR needed to affect the BBB have been shown to be as low as 0.001 W/kg, or less than holding a mobile phone at arm’s length. The US FCC standard is 1.6 W/kg; the ICNIRP standard is 2 W/kg of energy (SAR) into brain tissue from cell/cordless phone use. Thus, BBB effects occur at about 1000 times lower RFR exposure levels than the US and ICNIRP limits allow. (Salford, 2012 – Section 10)

As reported by the Cellular Phone Task Force, currently the most active research on the BBB is being done at Lund University in Sweden by Dr. Leif Salford..

“In laboratory rats, Salford’s team has demonstrated that blood-brain barrier leakage occurs after only two minutes of exposure. Further, a single two-hour exposure to a cell phone, even at reduced power, was shown to damage or destroy up to two percent of an animal’s brain cells.

Salford has called the use of cell phones by human beings “the largest biological experiment ever,” and he calls the potential implications of his laboratory results “terrifying.” “Those who might normally have got Alzheimer’s dementia in old age could get it much earlier,” he said.”

A significant stumbling block to moving the needle forward on the West’s understanding of harm attributed to radiofrequency exposures is that international regulatory bodies beholden to military and industrial growth have not been willing to consider biological impacts other than those caused by increased heat.

Rather than actually investigating reported harm, regulators continue to promote claims of safety by measuring the temperature of inanimate engineering models, creating a stranglehold on the evolution of biological science and human rights protections.

The West lags far behind the East in understanding chronobiology, for which a Noble prize was awarded in 2017. “Chronobiology is a field of biology that examines the generation of biological rhythms in various creatures and in many parts of body, and their adaptive fitness to solar- and lunar-related periodic phenomena. The synchronization of internal circadian clocks with external timing signals confers accurate phase response and tissue homeostasis.”

The West, unlike the East, does not possess the cosmological worldview that recognizes how the human energy field operates in harmony with the changing patterns of the electromagnetic cosmic current.

Acupuncture is a science dating back thousands of years. Acupuncture mapped out the patterns within the fiber optic-like network that carries light energy and chronobiology throughout the human energy field, choreographed by the angle of the sun’s rays and coordinated by the Spleen/Triple Warmer balance.

When provided in a pure electromagnetic environment that manifests the symmetry and rhythms of the external cosmic current, acupuncture can harmonize the internal energy field, while re-synchronizing it with the cosmos, whether within the hours of the day or the seasons of the year.

For example, Chinese Medicine recognizes that Gall Bladder and Liver energies dominate in the spring detoxification season, while Lung and Large Intestine energies dominate in the fall. An acupuncture treatment may also vary depending on the time of day that it is administered, in recognition of the health sustaining daily rhythms of exertion and rest for each individual organ system.

If man-made artificial frequencies are causing interference and static that disrupts the essential relationship between human health and the natural EMF environment, acupuncture may be uniquely positioned to be able to quantify and clarify how harm is occurring.

Unfortunately, acupuncture may also be rendered ineffective if the treatment room is subjected to inharmonious frequencies that are bioactive.

This is not only an issue for an acupuncture treatment office; many individuals are reporting sleep disturbances and/or inescapable, invasive sound that they attribute to being induced by artificial frequencies infiltrating their homes.

For example, in testifying regarding the safety of smart meters, epidemiologist Dr. Sam Milham stated, “Because it is at the front end of a building’s wiring, the dirty electricity from the smart meter’s SMPS has a gateway into that building’s wiring, and also into the earth via the house ground.  The house wiring acts as an antenna and the fields capacitively couple to the body through the air within 6 to 8 feet of the house wiring or extension cords plugged into the outlets.”

Many holistic health practitioners have begun to speak with their patients about the fact that wireless devices in common use in the home may be contributing to a host of health issues.

But the combination of acupuncture treatment and an increasingly polluted office environment may mean that:

1.  The office is inaccessible to a sensitive patient because the practice is located in a building laden with artificial frequencies, regardless of the skill of the practitioner.

3. Patients may find that they cannot sustain their adjustments. For example, currently, there are no protections in place to assure that sensitive individuals can be accommodated in their own homes.

The electric grid has become increasingly polluted, alongside the problem of inadequately sized neutrals, Also, in the United States, unlike in Europe, utilities are allowed to use the earth as part of the return.

In order to protect highly sensitive electronics, for example, in medical offices and music recording studios that cannot be subjected to static and interference, a clean 60 hertz sine wave can be provided that does not carry any electrical pollution.

Should this standard apply to other environments, such as schools, acupuncture offices, and homes?

The human body is a sensitively tuned instrument that is far more discerning of external forces than we give it credit for, and the external electromagnetic environment is far more relevant, benevolent, synchronizing, and harmonizing that our current science realizes or dictates.

In October of 2022, Acupuncture Today published the article “How I Broke My Nose on the Acupuncture Table” chronicling how an invasive frequency apparently caused injury during treatment.

The mainstream Western medical model does not recognize electromagnetic pathways, including meridians and radiant circuits.

It does not yet recognize the normal healthy expansion and contraction of the 26 cranial bones that accompanies inhalation and exhalation, and that this essential movement can become impaired. And because the West only recently discovered the brain’s detoxifying glymphatic system, the West has not yet been ready, willing, and able, yet, to study sky-rocketing rates of neurological diseases relative to the body’s sensitivity to radiofrequencies.

A society that is not literate in its own health-sustaining electromagnetic capacities and vulnerabilities does not notice the warning signs, including the discomfort of a brain that is compressed, not cushioned, not insulated, not detoxing, not protected by the blood brain barrier, not hydrated by an uninterrupted flow of cerebral-spinal fluid, not in synch with the nature environment, and not firing on all cylinders – due to skull compression. (Changes in glucose metabolism have also been observed.)

The true implications of invisible, covert frequencies assaulting human capacities and human rights are staggering. Reports of brain injuries to diplomats are the tip of a very large iceberg. When electromagnetic balance is altered, continuity of consciousness and the balance of exertion and healing rest is at stake, including each individual organ field’s high and low tides.

Could acupuncture’s wisdom end the battle that pits unacknowledged blockhead processing against tin foil hats, so that society can move, quickly, towards safe technologies and stewardship of the cosmic current as the true basis of wellness and balance?