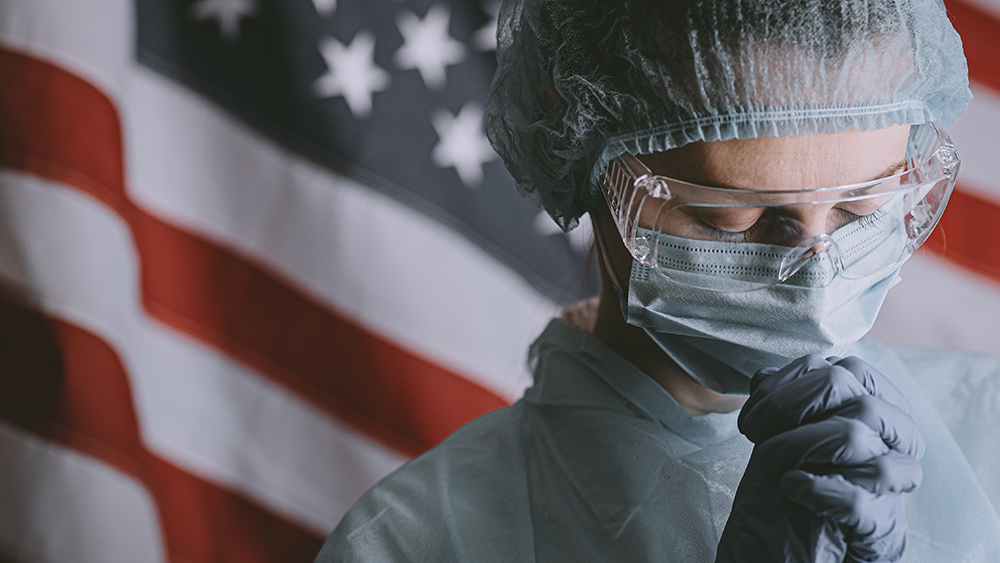 Ed Dowd, author of Cause Unknown (available at BrighteonBooks.com and other book resellers) joined me for an interview last night to share updated — and slightly horrifying — numbers about post-vaccine excess fatalities and excess disability claims.

The short version of that conversation is that each day in America, there are about 2,500 excess deaths and 5,000 excess disability victims due to covid-19 vaccines. This means, on average, about 7,500 Americans are removed from the potential labor pool each day. Granted, not all 7,500 are currently working, but most of them theoretically could contribute to the work force if they chose to.

Our conversation goes way beyond the mere numbers, however. We look at the macroeconomic implications of this daily removal of 7,500 people from the potential labor pool and what it means for America’s economy and military security, among other things. To hear the full conversation, listen to the interview below.

The decivilization of the USA

One of the more startling realizations in all this is that the United States of America is suffering the early stages of a “decivilization” event, not merely a temporary bump in the road. That term refers to the dismantling of the critical, complex pillars of a modern advanced civilization, rendering it unable to function.

The sudden collapse of Southwest Airlines’ flight schedule now being witnessed across the country is an excellent example of this. Here’s an airline company that can hardly fly planes because it can’t schedule its own crew members to show up. Reportedly, Southwest Airlines failed to invest in its IT systems and after “years of neglect,” the crew scheduling systems have cratered. Now the airline has cancelled more than 10,000 flights and may not survive much longer as a viable business entity.

Southwest Airlines flight attendants represented by TWI Local 556 call out the airline company for massive cancellations that are also leaving flight attendants stranded and blame years of neglect to technological improvements that would fix operational issues.

The level of rank incompetence that Southwest Airlines demonstrates here is also widely demonstrated by banks, government offices, utility companies and many other service providers. But many people miss the reasons behind it all. One of the primary reasons is that the covid vaccine is removing competent, experienced people from the work force by killing or injuring them.

In fact, as Ed Dowd reveals, the vaccine did the most damage among those who are employed. 2021 was a very dangerous year to have a job, it turns out, as the Biden regime forced employers across the country to mandate vaccines for all their workers. Many workers complied with the jab mandates and have since died or become disabled as a result. The fact that 7,500 additional Americans are suffering this fate every day points to not merely an economic recession or depression, but a decivilization outcome that risks ending western civilization as we know it, forcing the vaccine survivors into an existence they hardly recognize.

Ed Dowd calls this the “glacial Mad Max” scenario: It’s going to get very bad but not all at once. The slow, steady erosion of the pillars of civilization will become increasingly apparent over time as another 2.7 million people are killed or disabled by the vaccines each year. And that’s based on current rates of mortality and disability… rates that may become significantly worse among those who continue to take the mRNA jabs that obliterate their immune systems and caused their bodies to generate mysterious fibrous clots (which are not simply blood clots, by the way).

“Globalization is over,” Dowd declares in the interview (below). And that means the era of cheap, easy stuff is also coming to an end. The world we once knew, where we could visit a local Walmart or Target store and pick up foreign-made goods on the cheap, is over. From here, things are going to become a lot more expensive and less available. Rather than a global expansion into long, complex supply chains and economies of scale, we are living through the early stages of a global contraction and the collapse of globalism itself. The world is about to become a lot more local, with all the global supply chain efficiencies vanishing in short order.

And this is colliding with the fact that the U.S. work culture is practically non-existent among younger Americans. They have grown up never expecting to actually produce anything. They are consumers, after all, not factory workers or creators of anything real (your favorite celebrity NFT or crypto coin doesn’t count). Thus, at a time when globalization is collapsing and when Americans are going to have to grow, manufacture and process things at the local level, there’s hardly any local work knowledge remaining that could accomplish such a transition.

Those who know how to do anything — the working class of America — are being systematically annihilated by the jabs, leaving behind the non-working welfare class who possess no practical skills and believe they are deserving of never-ending universal basic income subsidies so they can continue to be consumers. Their world is about to come to a frustrating end, and America as a whole is going to witness the ravages of the reversal of the globalization miracle that made goods affordable, readily available and easily replaced.

Why the Pentagon can’t fight a war with Russia

Part of the definition of a nation is the ability to project power for the purposes of both defending your own shores and also extracting resources from other nations (via trade, coercion, or otherwise). This has been accomplished throughout history under various empires such as the British Empire, and the U.S. empire mastered the art of global resources extraction with its 1944 Bretton Woods agreement and the positioning of the dollar as the world reserve currency.

But to project power, a nation must maintain a degree of domestic industrialization so that it can manufacture munitions and weapons of war. This requires a long, complex supply chain of steel, polymers, oil, rubber, electronics and the like. More importantly, it requires a skilled and willing labor force that’s able to work in munitions factories.

As a result, there’s nobody left in America to run the war factories.

That is, until you consider the illegals who are crossing over the open borders by the millions. My contention is that the DoD plans to recruit illegals to run the munitions factories, because otherwise the United States has near-zero ability to run the industrial manufacturing necessary to sustain any real war effort with Russia or China.

After killing Americans with the bioweapon, the Pentagon will recruit illegals to man the munitions factories

After having sent the vast majority of its supply of artillery shells, drones, anti-tank systems and now even artillery pieces to Ukraine, the United States of America has very little left to defend itself against an invasion force from an enemy nation like China. Granted, the Pacific Ocean is a large moat, but given advances in the scale and efficiency of maritime transportation, it’s no longer the formidable chasm it was in World War II. China has the capability to sail hundreds of millions of tons of military equipment to invasion forces that might assault the West Coast of America, and China has the blackmail to force Joe Biden to order America to stand down its own military as such an invasion takes place.

The loss of the ability to defend your own borders is part of the decivilization now accelerating in the United States. And the vaccine fatalities and disabilities only accelerate this alarming phenomenon. Combined with the anti-fertility effects of the mRNA jab, it now looks like the USA will be utterly unable to achieve a sustainable reproduction rate to maintain its labor force. The Americans people are being deliberately killed off and replaced by illegal migrants, and those migrants are both willing to work and capable of reproduction — two critical properties that are being stripped away from Americans via the weaponization of the vaccine.

The end result of all this is not in doubt: The economic, military and demographic collapse of the United States of America — a top goal of one world government globalist types who have long regarded the USA (and its Constitution) as a thorn in the side of global domination.

Thus, the positioning of the vaccine as a depopulation weapon is just one part of an engineered collapse event designed to take down America and terrorize the world with another set of carefully planned (and previously simulated) crisis events.

You are being annihilated, then replaced

Those who fail to understand the macroeconomic and geopolitical implications of the vaccine depopulation scheme are missing the bigger picture. It isn’t merely about killing people off, it’s about killing certain people so they can be replaced by a foreign workforce that’s still willing to run the munitions factories and sweep the floors. The robot takeover, after all, hasn’t arrived yet. Until it does, the globalists are happy to make do with a migrant takeover, just as long as they can keep the weapons factories operating as long as possible.

The vaccines targeted the most competent, first world professionals on purpose. As those people are swept out of the way, they will be replaced by obedient, low-education illegals who will be granted amnesty, then work permits, and then voting rights to help keep the uniparty in power as they engineer the total collapse of western civilization — a process now accelerating by the day across Western Europe, by the way. Note carefully that both Democrats and RINO Republicans are all in favor of amnesty. This should be no surprise once you understand the reality of the replacement effort now under way.

In summary, we are not merely watching genocide; we are witnessing the permanent rejiggering of the economic order by malicious, anti-human Luciferians who celebrate death and destruction. Every person who takes another booster shot is inadvertently working on their behalf, by the way, helping to achieve their malicious aims.

And to top it all off, the oblivious masses have no idea any of this is happening, even as their own family, friends and coworkers are being maimed or killed by the vaccines. The global vaccine holocaust is being carried out right under the noses of the ignorant, and thanks to CIA-controlled narratives across media and tech platforms, those who don’t possess the mental capacity to question false authority are instead spellbound by it, and they will soon be destroyed by it.

– German minister calls for climate change dictatorship, strict limits on your movements
– Mainstream music video depicts vaccine transhumanism, fallen angels and rising evil
– Collapse of Southwest Airlines reveals widespread incompetence / idiocracy in America
– Western countries try to punish Russia with $60 oil limit, only hurting themselves
– Why the US keeps the border wide open: Americans are being REPLACED
– 7,500 Americans are DEAD or DISABLED each day thanks to mRNA jabs
– This is why banks, airlines, government, etc., can barely function
– DoD likely to start hiring illegals to run munitions factories
– Illegals actually WORK, while inner city Americans LOOT and STEAL
– USA ability to sustain a war with Russia is nearly non-existent due to labor collapse
– Detailed interview with Ed Dowd, author of “Cause Unknown”
– Macroeconomic implications of loss of 7,500 people each day from the potential work force
– “Glacial Mad Max” has been unleashed
– “Globalization is dead” – local production and trade will dominate
– The era of cheap, easy STUFF is over – life will get more difficult from here