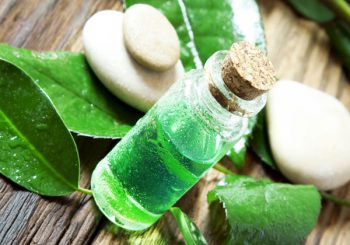 Tea tree oil is considered to be one of the most versatile essential oils. While it has a long history of use for the treatment of skin conditions and wounds, you may appreciate this pungent oil most when you have an unsightly cold sore or bothersome wart. Given its many uses for health and home, I highly recommend tea tree oil.

What Is Tea Tree Oil?

Tea tree oil, also known as melaleuca oil, is extracted from the leaves of the tea tree plant (Melaleuca alternifolia), a member of the myrtle tree family, which is native to Australia and New Zealand. The name was coined by British explorer Capt. James Cook in the 1770s when he saw native Australians brewing tea using leaves from the tree.1

The tea tree was highly prized by primitive Australian communities for its unique healing ability. With regard to some of tea tree’s uses, The Australian Tea Tree Industry Association states:2

“The indigenous Bundjalung people of eastern Australia are believed to have used tea trees as a traditional medicine for many years in a variety of ways, including inhaling the oil from the crushed leaves to treat coughs and colds and applying the leaves on wounds as a poultice, as well as brewing an infusion of the leaves to make a tea for [the] treatment of sore throats, or applying [it] on the skin for minor wounds, abrasions and insect bites and stings.”

It was only in the 1920s and 1930s that tea tree oil’s medicinal properties became more widely known, thanks to the efforts of researcher Arthur Penfold, an Australian state government chemist, who published a series of papers on the oil’s antimicrobial properties.3 He rated it as 11 times more active than phenol. The author of a 2012 review on tea tree oil stated:4

“The commercial tea tree oil industry was born after the medicinal properties of the oil were first reported by Penfold. Production ebbed after World War II, as demand for the oil declined, presumably due to the development of effective antibiotics and the waning image of natural products.

Interest in the oil was rekindled in the 1970s as part of the general renaissance of interest in natural products. Commercial plantations were established in the 1970s and 1980s, which led to mechanization and large-scale production of a consistent essential oil product.”

Tea tree oil contains more than 100 components, but it is mostly made up of terpene hydrocarbons: monoterpenes, sesquiterpenes and their alcohols.5 Through modern distillation methods, manufacturers are able to produce tea tree oil with a clear to very pale golden or yellow color, and a camphor-like scent.6

Authors of lab-based experiments performed by a research arm of the Australian government found tea tree oil to be effective in the treatment of cold sores. They concluded:7

“TTO (tea tree oil) may be a potentially useful alternative treatment for cold sores which is relatively inexpensive, acceptable to patients and which does not have the capacity to induce resistance to systemic antiviral agents. A larger study is required to further evaluate TTO as a topical treatment for RHL [recurrent herpes labialis, also known as cold sores].”

Research published in the Journal of Antimicrobial Chemotherapy8 indicates tea tree oil has shown broad-spectrum antimicrobial activity in vitro, including activity against herpes simplex virus (HSV), the etiological agent of RHL. In this research, patients aged 18 to 70 years participated in a randomized, placebo-controlled study.

Participants presented as soon as possible after onset of a cold sore outbreak and were randomized to receive either 6% tea tree oil in an aqueous gel base or a placebo gel, both of which were applied five times daily. The median time to re-epithelialization after treatment with tea tree oil was nine days, compared with 12.5 days for the placebo group.

The study authors stated, “Tea tree oil may be a potentially useful cheaper alternative, acceptable to patients and which poses little threat of inducing resistance to systemic antiviral agents.”9

A study published in the journal Microbiology and Immunology10 evaluated the impact of 12 essential oils, including tea tree oil, on HSV type-1 (HSV-1) in vitro. The researchers noted tea tree oil had previously been shown to have antiviral activity against HSV-1 and HSV-2, along with eucalyptus essential oil. They said:11

As you can see, when it comes to treating cold sores, you have more than one option when applying essential oils. The good news is, if you have a sensitivity to tea tree oil, you might also try either eucalyptus essential oil or lemongrass essential oil. The video above provides a couple of additional ideas on how to treat cold sores naturally.

Warts come in all shapes and sizes, and tea tree oil has been shown to be effective in treating warts found on the genitals, hands and feet. The treatment for each type of wart is similar: Simply apply one drop of tea tree oil to a cotton ball and press it over the wart.

The oil was applied directly to the lesions once a day for 12 days. The study authors commented, “The case highlights the potential use of tea tree oil in the treatment of common warts due to human papilloma virus.”13

25 Other Uses for Tea Tree Oil

Tea tree oil has been long valued for its antifungal, antibacterial and antiviral properties. It was first used in dentistry and surgery to help clean wounds and prevent infections in the 1920s and during World War II to treat skin injuries suffered by people working in munition factories.14

More recently, tea tree oil has been added to lotions, shampoos and soaps. Below are 25 anecdotal uses for this versatile oil:15,16

Undiluted tea tree oil has been known to cause skin irritation in some people, but the risk is considered low.

Authors of a 2003 study,17 involving 311 participants treated with undiluted and diluted formulations of tea tree oil, said, “Topical application of tea tree oil is associated with negligible skin irritancy. In the group of subjects studied, the risk of developing an allergic dermatitis from topical tea tree oil usage was found to be less than 1%.”18

That said, they also noted three subjects developed a grade 3 skin reaction when tea tree oil was applied, which is suggestive of an allergic reaction. As with all essential oils, I recommend you perform a patch test as a first step to determining if your body may have a sensitivity to tea tree oil.

Simply apply one drop to the underside of your forearm and wait 24 hours. If your skin breaks out or you have other unexplained symptoms, do not use the oil. Keep in mind that tea tree oil can be toxic when ingested in larger amounts so never use this oil orally, and do not swallow any homemade preparations containing tea tree oil.